I knew as soon as I published the previous post that I should have included a picture of the "everything wall".  I guess by making the "everything wall" it's own post, I'm obliged to give a bit more detail to what's on it.  Feel free to move on to another blog when you're tired of reading the list below... 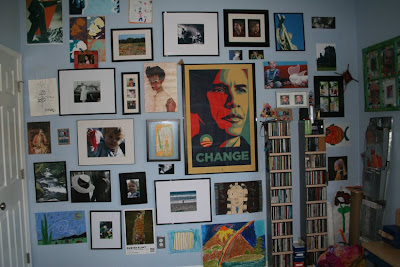 1.  Obviously in the center is one of the famous campaign posters of Obama.  Paul is a huge fan of Shepard Fairey, the artist that created those posters, so the everything wall needed one of those.
2.  Beside Obama on the left, toward the top, is Egon Schiele.  Some pretty scary art came from that guy so this is definitely tame for him.  Another one of Paul's favs.
3.  Directly below Schiele is a mixed media piece by Woodie Anderson, a favorite local artist of ours.  You can also find her on etsy.
4.  Directly above Obama is a photograph of a potter by August Sander, Paul's favorite photographer.
5.  Directly below Obama is an Egyptian pharaoh painting with heiroglyphs on either side.  Made by Paulie.
6.  Directly below the pharaoh, Elizabeth's volcano and rainbow drawing, done with oil pastels.
7.  Above the cd shelves at the top is a photograph of one of the angels on the Ponte Sant'Angelo, taken by Paul on our trip to Rome in 2005.
8.  Directly to the right of the angel, a photograph of Pablo Picasso.
9.  Directly below Picasso, a photograph of Blarney Castle taken by me last year.
10.  On the far left on the wall, a white paper bag is hanging with a simple drawing by De La Vega, who we met at his shop on St. Marks Place in the East Village.
11.  Directly to the right of the bag is a picture of my grandmother posing beside her first car in the 1950s.
12.  On the very bottom left is Paulie's interpretation of Starry Night.
13.  Two over to the right from Starry Night is a Klimt poster from the Neue Galerie in NYC.
Clearly there are other photographs, mostly taken by us, and other kid art as well, but you've got the high points.  Just wait 6 months...it'll change anyway.
Posted by Joy at 4:43 PM