a tale of two sweaters

Although I really did not need another online habit pulling me away from my other chores and responsibilities, when Pinterest came calling she was so enchanting and enticing that I took the plunge and joined her for a dance. She wooed me with her lovely crafts, charming home projects, delectable cuisines and stylish apparel. Before I knew it, we were going steady, and I brought her home to meet the family. 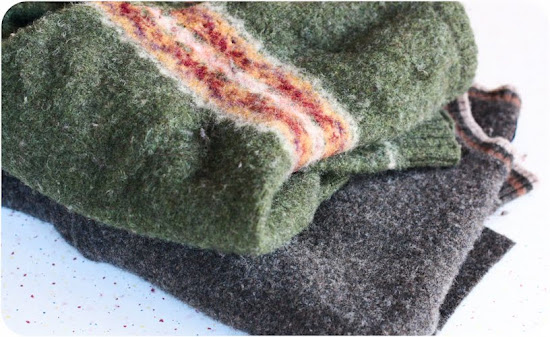 When I found 2 projects that needed felted sweater (already have those on hand, check!), Finn and I decided to show off Ms. Pinterest a bit and see if she could do a bit more than be an online friend. 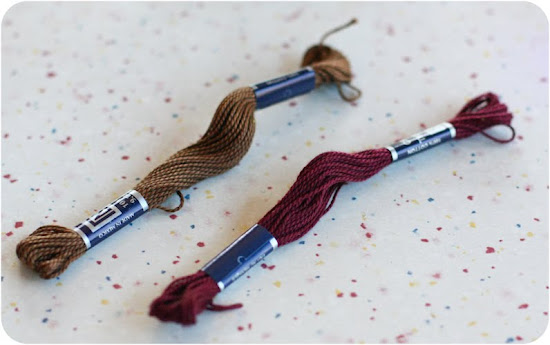 We gathered our felted sweaters, embroidery floss, and I melted some wax, while I examined the many glass jars that are tucked into (literally) every nook and cranny of my kitchen, searching for the next jar candleholder. 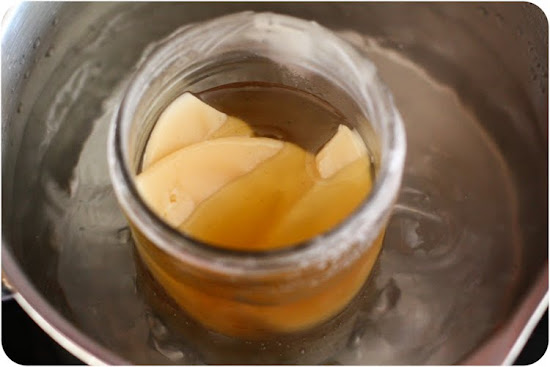 The ex-raw honey jar it is! One the wax was poured and cooling with a wick centered, Finn and I made quick work of Pinterest project #1, courtesy of Mamaroots. 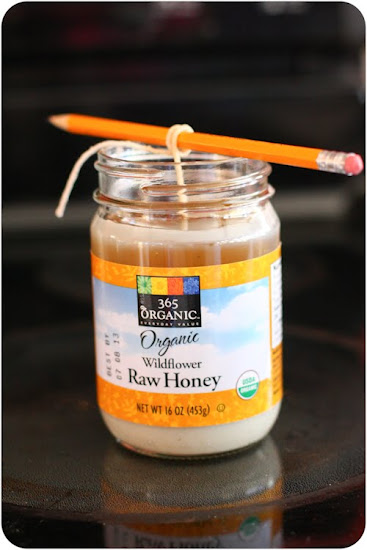 Although I didn't really follow her pattern, just freehand cut the hat, the idea is the same. Finn glued on a wooly beard while I sewed the hat, and another tomten joined the family. 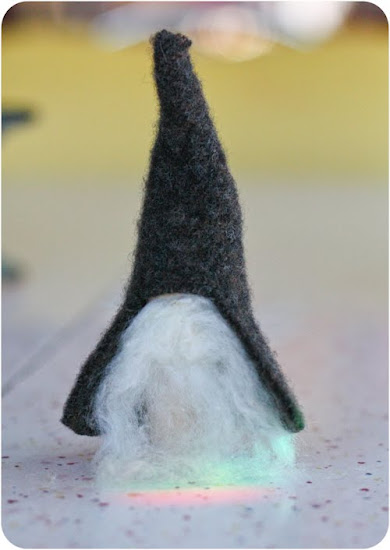 Finn was taken aback by his brown hat, rather than the typical red one that tomten's wear. 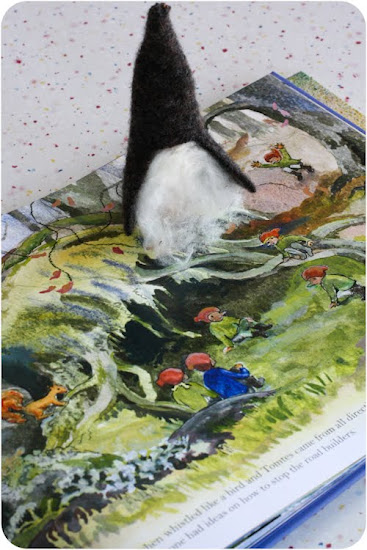 But the tomten in my head was the old, old tomte from The Tomte's Christmas Porridge, and his hat is decidedly brown. 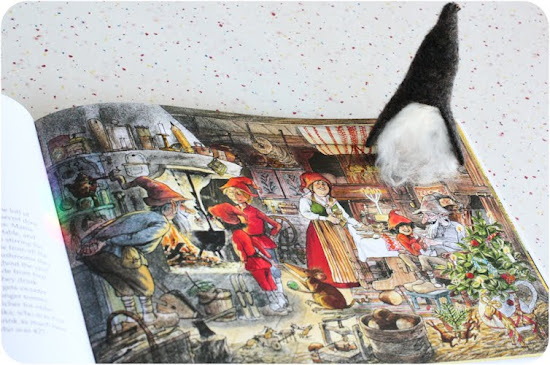 Finn didn't let the hat color bother him for long, he quickly found a small pottery bowl from my Art-o-mat collection and a fox from our window puzzle to perform The Tomten and the Fox. 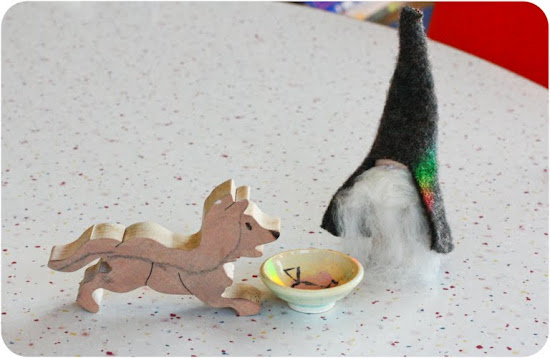 His tomten happily shared his porridge with Reynard, the fox. 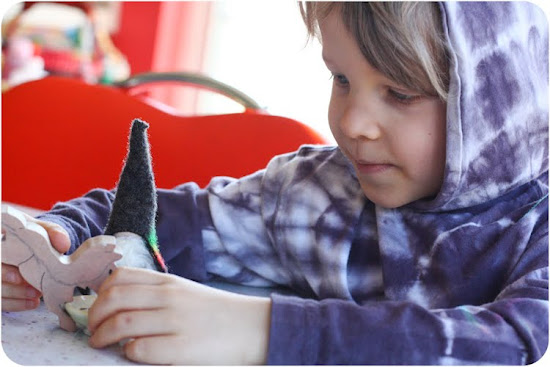 Then we had to read it again so he could act through his play one more time. 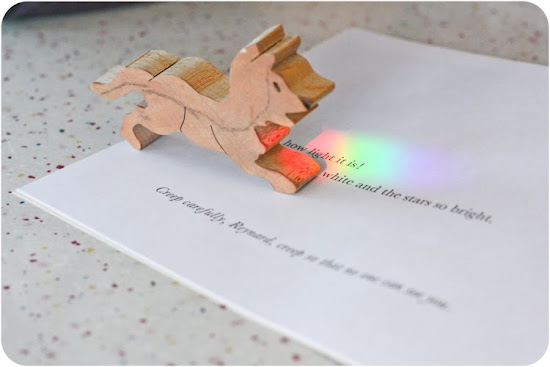 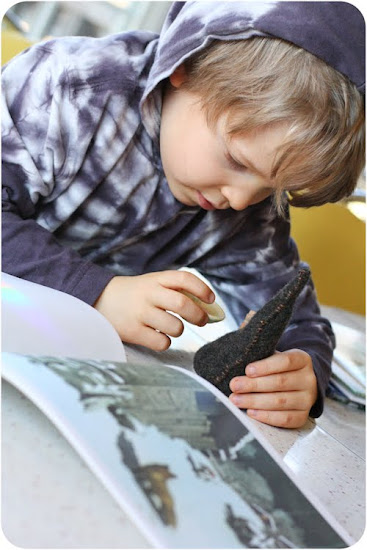 By the time we were through playing with the tomten, the candle was sufficiently cooled and I began the second Pinterest project of the day. I think the project would have gone more quickly if I had used the sleeve of a felted sweater like the pin shows, but I really wanted to use the design across the center of the sweater I felted. 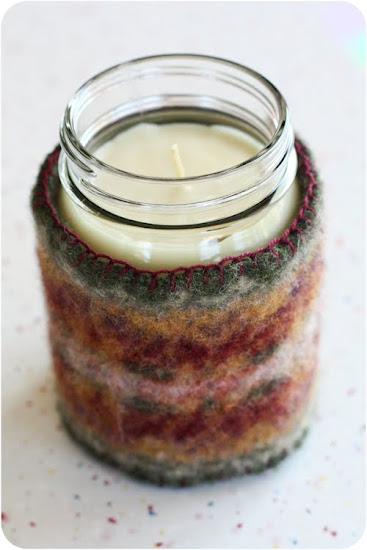 I blanket stitched around the top and bottom of the sweater to give it a more finished look. What a warm and cozy winter candle! 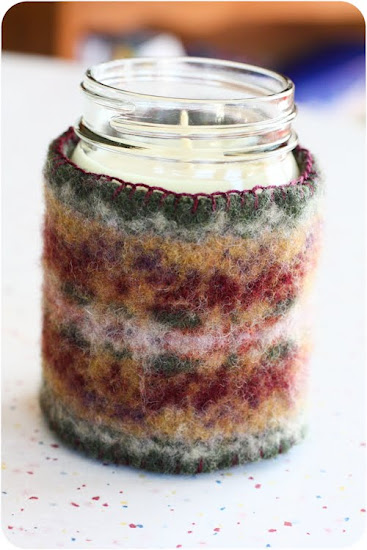 Have you completed any Pinterest projects? Or are you resisting her woo?
Posted by Joy at 5:32 PM