Finn's love for audiobooks reaches back to his discovery of Magic Tree House last spring. He'd been listening to audiobooks occasionally since he was three, but when he realized there was this world of "Jack and Annie" and that our local library had books 1-40 on CD for him to borrow, the love truly began. He plundered his siblings shelves for any MTH books he could find and he'd gather them, turn on a CD and flip through the book, finding the pictures of the story being narrated. 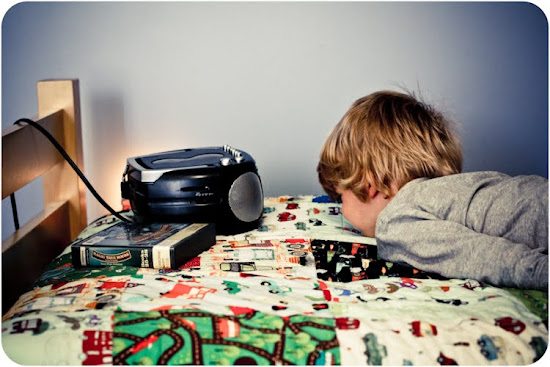 His love for audiobooks hasn't stopped there. In fact, he first fell in love with the world of Thomas the Train through books and CDs rather than the television. (Not that the marketing can be avoided whichever direction you learn them from. Oy.) He is also partial to Just So Stories, fairy tales, Dragon Tales, James Herriot, Frog and Toad and many other audio stories. 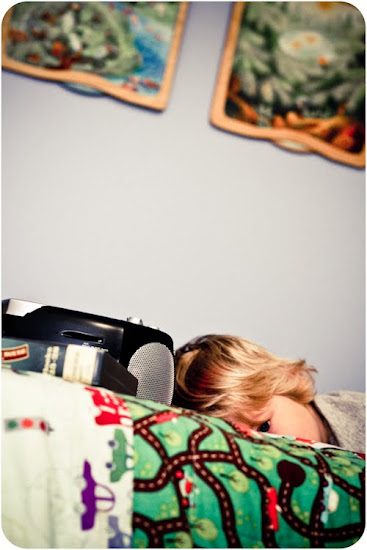 When we first bought his CD player this summer, it was with the hope that he would listen to some stories in the evening when his siblings are reading in bed. Not only did this work amazingly well, we have to go into his room and switch out his book cd for a music cd around 8:30 because, left to his own devices, he's been known to listen to audiobooks until 10 pm or after. 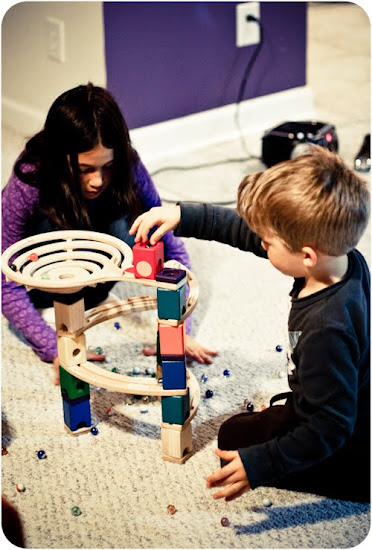 When we started homeschooling this fall, it never occurred to me that Finn would see this as an opportunity to listen to audiobooks every waking hour that his siblings aren't home to play. I do ask him to pause the stories for specific things that we do each time, like our reading, poetry, and other work, but through many-a craft, coloring and writing, he listens and works at the same time. And anytime I'm not working with him on something, he's playing while listening to books. 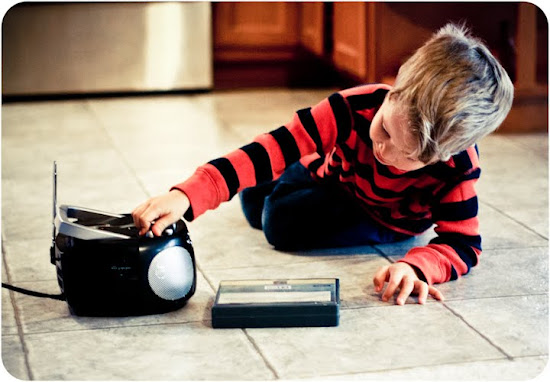 At first I wondered whether I should be making him turn the books off a little more frequently for us to do other work. Am I being a slack homeschooling mom because I let the audiobooks do so much of the work (or entertaining)? But when I hear him randomly spout off facts, like where Pompei is located or when the Titanic sank, I know he is learning. But although I've heard many times the benefits of audiobooks, I still thought of audiobooks as inferior to reading for some reason. Until Finn's obsession, that is. 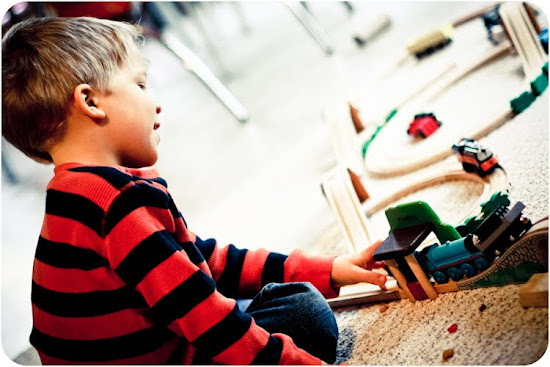 Now when I see him playing with trains, if the CD player happens to be off, I hear him narrating his play, "I shall. I shall make it up the hill, murmured Percy as he chugged up the track." We are also regularly asked questions like "what does baffled mean?" or hear exclamations like, "there is something disturbing me in my sock but I can't discover what it is!" While riding his bike down a hill the other day, Finn steered over to me and proclaimed, "I'm gasping for breath because I gathered speed coming down that hill." 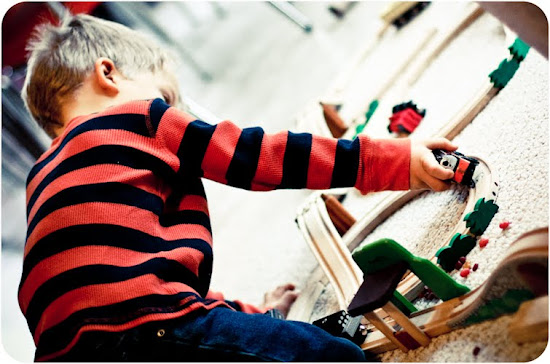 One of the benefits I've often heard touted for audiobooks is increased vocabulary, I don't think I really understood what that could mean, especially with a child who listens to audiobooks up to 4-5 hours almost every day. I could spend a month focused on increasing his vocabulary for 30 minutes a day during one-on-one time, and I'm convinced that he wouldn't have nearly the grasp on language that he currently does. Finn has always had a rather large vocabulary and an interest in words so it only makes sense that audiobooks would be so appealing to him.
Maybe he'll be a poet, writer, educator, (or someone who indefinitely studies literature so he can hang out in college reading forever) or maybe he'll just remember with fondness the year he spent listening to audiobooks continuously.
Posted by Joy at 8:37 AM