a compass pointing toward creativity

As my oldest 3 kids have gotten older, I've noticed that more of their play and engagement with one another takes place in the secret of their bedrooms or nooks and crannies of the yard and parks we visit. When I catch a glimpse of them creating, generally at the kitchen table, I don't always take notice, but when hairdryers and talk of pirates wafts over toward the stove where I'm working, it tends to catch my attention.
Apparently a pirate movie is deep in production and one of the set pieces that was needed was a compass. Some children might find a slice of branch or cardboard to make compasses, but clearly, mine had other ideas. They had 2 different varieties of modeling wax, and the hairdryer to help them mold. Curious to see where this was heading, I asked them to show me their compasses when they were complete. With swords already strapped to their hips, they promised me a quick peek before heading back to their swashbuckling adventure.
Paulie and Philip each made a lovely compass in about 30 minutes of molding, sticking and trimming with a dull knife. Off they dashed after I admired their work (I didn't notice that their Es and Ws were reversed until the pictures were downloaded. Alas.), and I could hear arggghs drifting down the stairs while Elizabeth's head stayed bent over her waxy instrument. 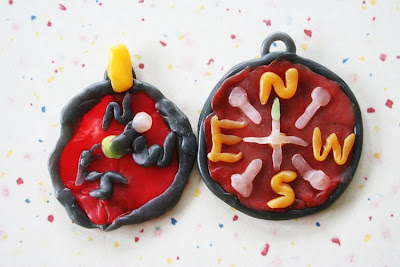 After another 20-30 minutes of work, she proclaimed, "I'm done!" And she dashed over to show me her completed compass. With a little more wax for her needle and a pushpin set in a hole in the center of her wax, she managed to make a wax compass with a movable needle. 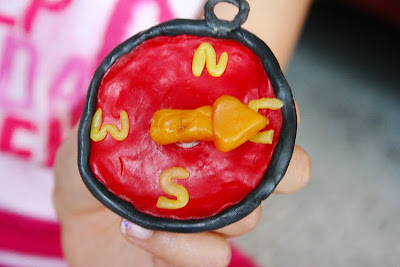 Whenever people tell me that I'm creative or inspiring, I generally thank them. What I often want to say, and so I'll say it now: my creativity just hits the tip of the iceberg of the ingenuity and imagination that I'm fortunate to be surrounded with in my family. I'm so blessed to have kids with boundless imagination, determination, and resourcefulness to make their every dream become a reality under their own fingertips with whatever materials they have on hand. 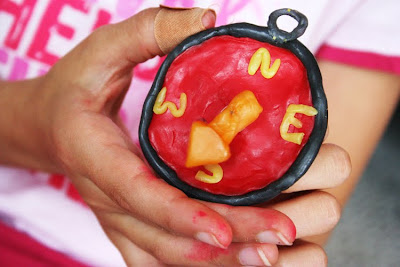 And what I loved almost more than the creativity...when Elizabeth said, "we should bend them over the sides of the table like a new version of Dali's melting clocks." Awesome.
Posted by Joy at 4:18 PM