Elizabeth's 9th birthday was spent in low-key celebration. We started to realize after several straight years of post-birthday party meltdown (and occasionally even a Christmas night meltdown) that Elizabeth doesn't do well with structured 2 hour birthday party confines. She becomes so excited that she's beside herself and she plans in her head, many times over, exactly how everything is going to go and how everyone is going to behave/react/interact. Needless to say, this is a recipe for failure and distress on the part of the birthday girl. Not that she hasn't had some great parties, because she has, but becoming distraught, even at the end of a great time, just isn't worth it. So this year we suggested to Elizabeth that maybe a more low-key celebration would be better and she wholeheartedly agreed. Actually, "that's a good idea. I don't do birthday parties well" is what she said. Here's to self-awareness!

After picking Elizabeth up from school and taking her to Whole Foods to pick out her birthday dessert (she chose Ben & Jerry's Cake Batter ice cream), we headed home for a simple meal and some art time by candlelight. 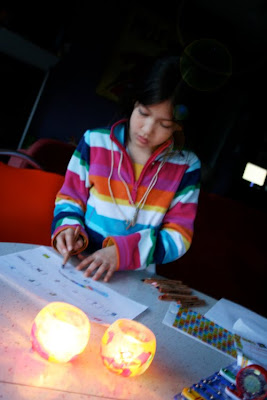 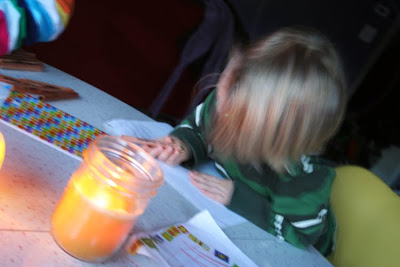 Elizabeth was so wrapped up in her art... 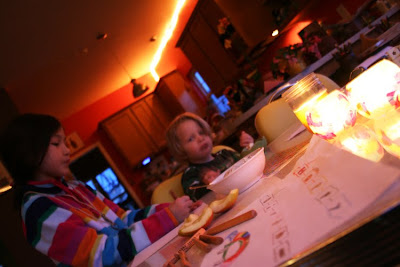 that her ice cream turned to soup. And she said, "that's ok, I'm not really hungry anyway." (Talk about self-awareness! How many kids do you know who just leave their dessert barely touched...on a regular basis.) 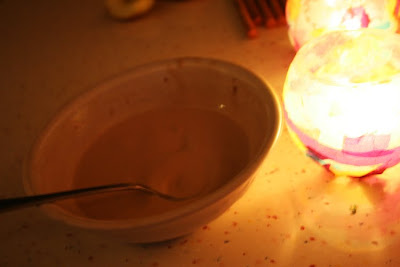 Her main gift was a new bed and room rearrange. I was surprised at how much energy she absorbed and reflected during the room changes we did last weekend. Her old bed was falling apart, and we had ordered a new one anyway. But she practically glowed at her chance for a "new" room. She was also thrilled that we hung her favorite quilt, made by a dear family friend, over her new bed. 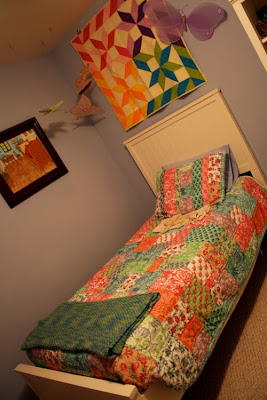 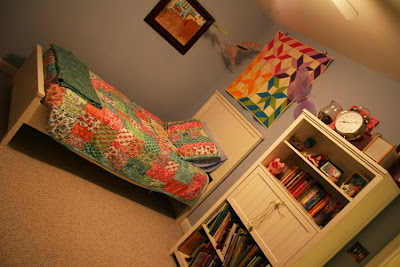 She's also having a small sleepover tomorrow evening with 2 close friends but no planned party. Of course, we *might* just have cupcakes for dessert and we *might* have a family game night, but that's not an official party, right?
Posted by Joy at 9:12 PM