A big boy bed and a shared room.

Finn moved into his new big-boy bed this weekend. He was so thrilled with his status climb, although a little confused about the room change and how the room-sharing would work with Philip. Now that Finn and Philip are sharing the biggest of the kids' bedrooms, we decided to rearrange the room and take the bunks apart. Although there is less floor space in this arrangement, I'm hoping that each of the boys feel like they have some room space that is just "theirs", and therefore, Philip's belongings will get moved around less on the nights he's not here. We placed one bunk on either wall with very sturdy bookcases back-to-back in the middle as a semi-room divider, along with the lego table. 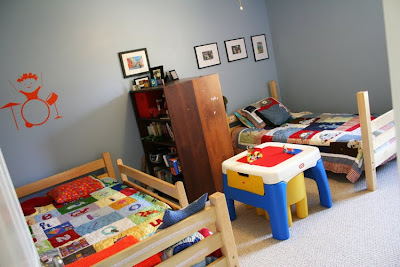 On Finn's side of the room, what was the top bunk, conveniently outfitted with rails so there will hopefully be no bumps in the night. He also was able to start using the new quilt, blanket, sheets and pillow he received for his birthday. 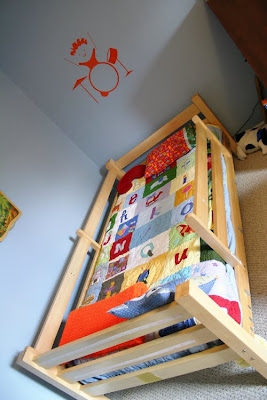 The fabric from last week was made into a pillowcase for his new child-size shredded rubber pillow, courtesy of his aunt and uncle. This was a fun and quick project made using the idea from this tutorial, but making up my own measurements as Finn's pillow is only 14 x 20. 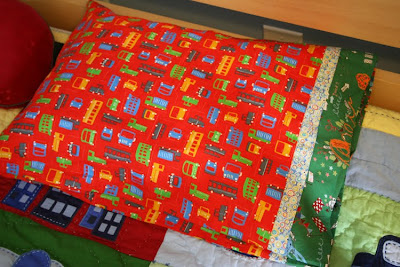 Finn now has his very own bookshelf as well, which is sort of a right-of-passage in our family. He has a good start on his book collection too! 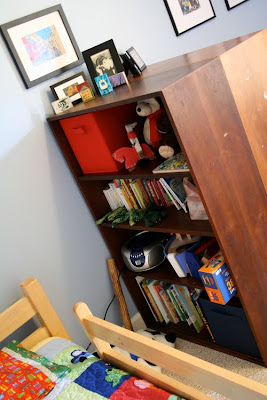 Philip's bed is just on the other side of the bookshelf wall, complete with the alien quilt which he received for Christmas (it's nice to have a generous aunt who works for Pottery Barn Kids) and his framed lego pictures. 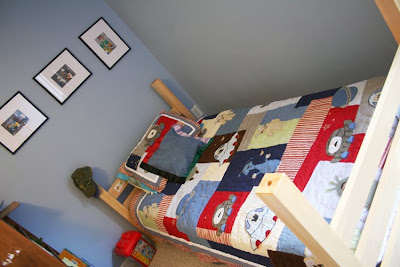 His bookshelf is only mostly set up at this point. All of his precious lego pieces that are usually displayed here remain in the cardboard box waiting his touch to arrange them properly. 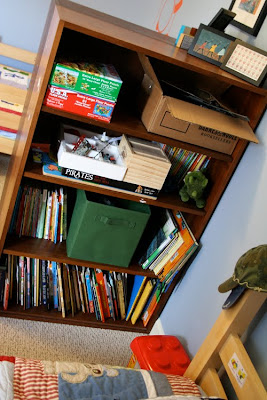 The other side of the room with their bureau, a few toys, and Philip's art-o-mat collection. 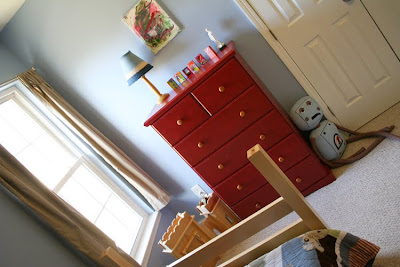 The top of Finn's bookshelf holds Finn's art-o-mat collection, his James Joyce photo (he was named after Joyce's Finnegan's Wake), and his painting of Dingle. 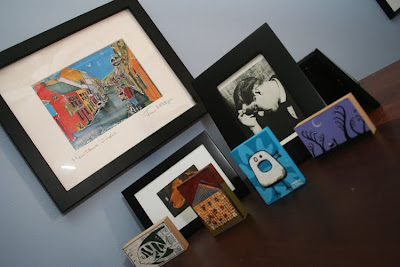 A few other tiny pieces of Finn's art that made the transition with him to his new room. 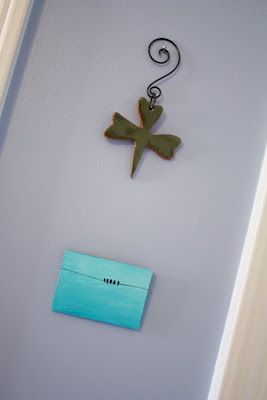 I have one more room, which received a bit of an unplanned makeover, left to show you, probably tomorrow. Until then...I'll be crossing my fingers that Finn will sleep well in the same room with Philip for the first time tonight!
Posted by Joy at 7:51 PM