Hey!  We have another kid in this house.  Did you know that?  His name is Philip, and he's 6 years old.  He has the unfortunate distinction of being the middle child in this family, added to the fact he's a quiet, methodical player/worker; all add up to the fact that he's rarely featured, seen or otherwise spotlighted on this blog.
Today is Philip's day!
The other evening Philip was slightly whiny, as he sometimes gets when everyone else in the house is boisterously involved with each other, and he's feeling a bit left out.  Remembering that he received a puzzle in his stocking that had yet to be built, I asked him if he'd like to work on it together.  The look of surprise and pleasure on his face was nearly heartbreaking.  Poor middle-child Philip!  (Now I realize that technically Elizabeth is also in the middle, however, as the only girl, she gets her fair share of attention.)  Snap, snap, snap!  Philip efficiently placed each piece with minimal effort, needing little input from me.  He's the child that likes to figure things out.  Puzzles, legos, other building projects...right up his alley. 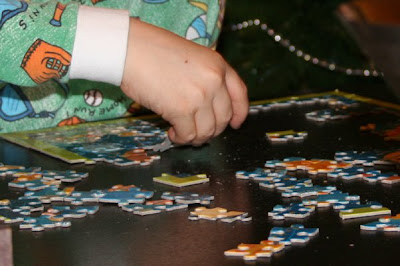 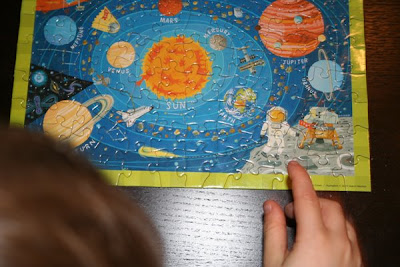 Christmas morning he did not even rest, or make a peep toward anyone, until his new lego set was entirely constructed. 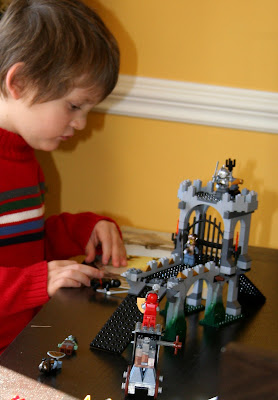 Do you want to know something else about Philip?  He tries really hard to keep up with his older siblings.  That essentially means that Philip is frequently injured.  Just last week he had a run-in with his older brother and a hammock.  Philip's face lost the battle--one broken nose, one black eye.  Isn't he pitiful?! 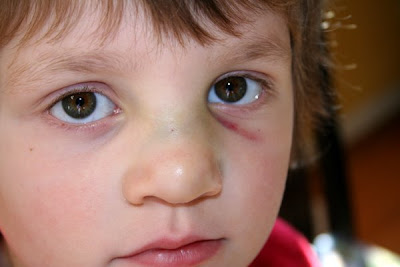