I tend to not be a half-way kind of person.  Once I get into something, I dive headlong into every facet of the experience.  Thus, canning has become my new obsession.  I've always canned several jars of jam each spring and summer, and last summer I even canned quite a few quarts and pints of tomatoes.  This summer, I've decided that I want to can as much food as I think we'll possibly use over the fall, winter and early next spring.  I started with strawberry jam, 3 different varieties, and strawberry lemonade concentrate, and now that the strawberry season is winding down, I'm moving on to other canning.  My first non-jam canning of the season were these lovely pickled red onions.  They are so wonderfully delicious that I could eat the entire jar by myself.  Fortunately, half of my kids love them so I'm saved from my own compulsion.  They are particularly tasty alongside grilled veggies.  I also canned a few jars of pickled asparagus, which we have yet to try, but aren't they pretty! 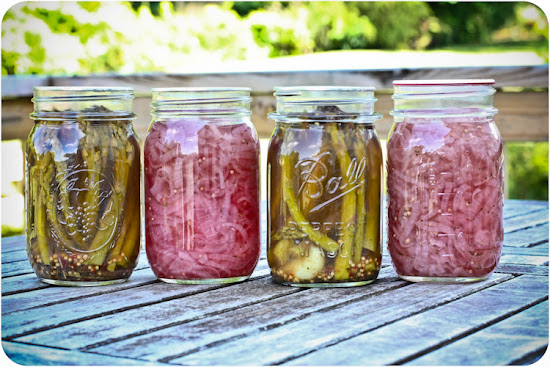 Another of my canning experiments involved the first of the summer peaches at the farmer's market, which I found last week and couldn't resist buying a few pounds.  They are the smaller, harder-to-remove-from-the-pit variety, but I wrangled 10 or so and simmered them in a small crock pot with sugar, lemon juice, and nutmeg for about 24 hours until I had peach butter. 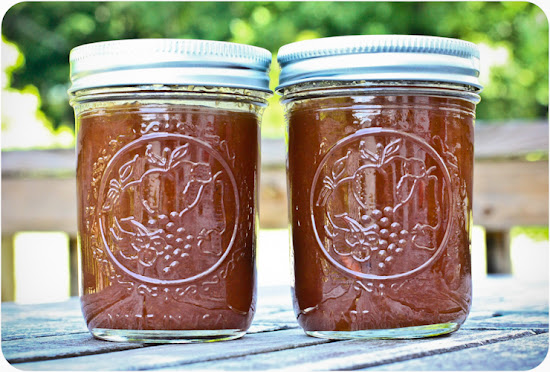 When I began thinking that I would try to can a great deal this summer, I knew that I would probably need a pressure canner.  I grew up around them so I don't have the fear of them that many modern canners seem to have.  Paul and I decided to use some of our tax money this year to buy this one.  I also thought it might be useful to have a stainless steel funnel to replace my many-years-old-and-slightly-melted-in-one-spot plastic one so I showed him a link of the one I wanted, maybe as a birthday present--hint, hint.  As Mother's Day drew near, he remembered that I wanted a stainless steel funnel, but in true Paul fashion, couldn't remember which one exactly, so he decided to buy every size funnel that is sold on Amazon. 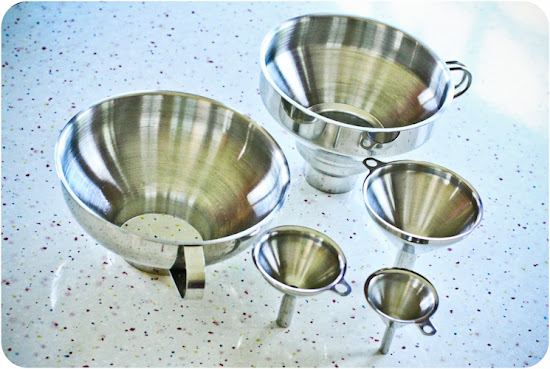 Occasionally, this kind of behavior gets him into trouble as I wonder how he could possibly spend $40 when I just needed a (singular, 1) funnel, but I laughed and tried to think of how I might use 5 funnels and believe it or not, I've already used all but 1 of them.  And it's barely been a week since Mother's Day!  The filtered funnel can be used as a second canning funnel, once the filter is removed, and it's also great for filtering the strands from the kombucha that tend to offend my children when they are drinking it. 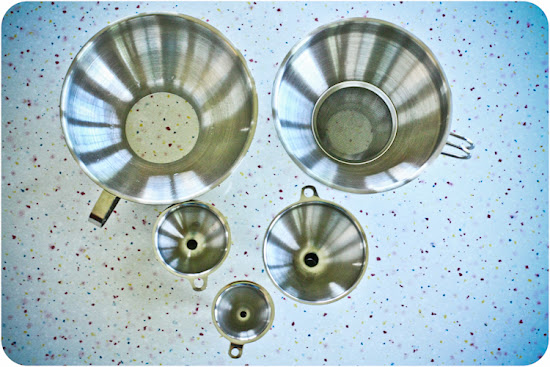 He also bought me Canning for a New Generation to go with my funnels and then Food in Jars came home with him a few days after Mother's Day once it finally arrived in bookstores.  Both of these books are excellent.  Food in Jars is a also wonderful blog and contains the recipes for both the pickled red onions and pickled asparagus in my photos above.  Next up, I plan to take the kids cherry picking in the next couple of weeks and try out a few of the cherry recipes in these books.  (Holiday Cherries from Canning for a New Generation sounds particularly delightful.) 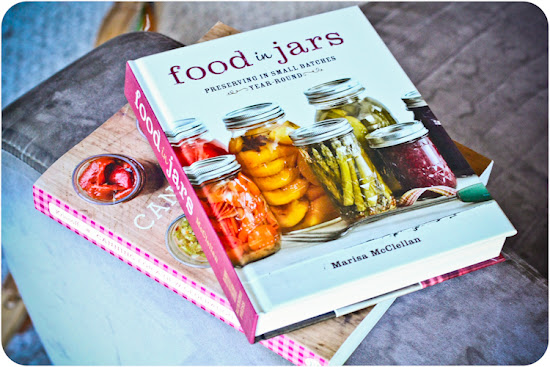 One last little experiment that has been successful in the last week, homemade dishwasher detergent.  I've never been particularly impressed with "green" dishwasher detergent alternatives, nor did I like the borax recipe that I tried in the past.  This recipe has no borax, only baking soda, citric acid, and salt with a vinegar rinse.  We've had sparkling dishes with no residue every time we've used this, which has been for about a week now.  I also had a fancy jar to keep it in, which makes me happy.  I found this plastic scoop in the nether-regions of my utensil drawer, and although it's not very pretty, it does get the job done.  Maybe one day I'll find an excuse to get this one. (And Paul, if you're reading this, these pretty scoops in a variety of sizes are another instance where I might just forgive your propensity to forget exactly which one I wanted.) 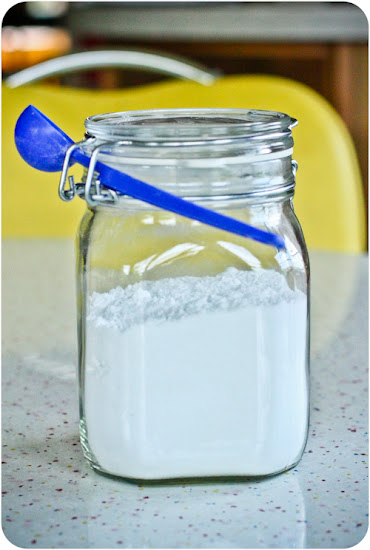