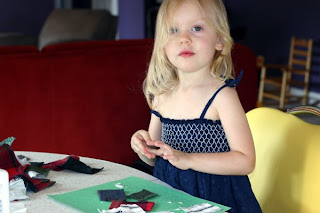 Jenni had brought me a great basket with some homemade bath salts, salt scrub, massage oil and chocolate. (The chocolate is worth a mention because she brought me 2 bars of the EXACT same chocolate I bought for her: Chocolove's Dark Chocolate with Raspberry and 65% cacao 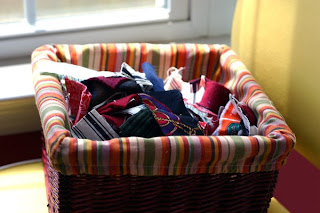 Dark Chocolate! Yikes!) So since the material scraps were living in an old shoebox, I decided to move them over to the basket which, even though the scraps had only been in the box for a week, offended Finn's sensibilities and he's been, on the stealth, moving material back into the shoebox and putting the lid on, ever since.