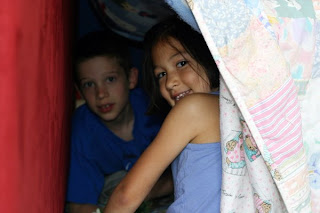 Paul and Elizabeth spent their Saturday afternoon taking advantage of the fact that Finn was sleeping (for 4 hours!) and honing their fort-building skills. As usual, they dragged a huge pile of blankets from Elizabeth's closet, where she hoards them for this particular purpose, down to the living room. They covered every piece of furniture, stuffing the blankets in every nook and cranny to keep them from falling in. Once their fort was declared complete, which took more time than they actually ended up having left to play in it, they camped out under the main portion behind the couch and drew pictures and made cards to be delivered through the "mailbox" they had established outside the fort.

Philip, not one to be a joiner, preferred to work on puzzles. He especially enjoyed putting together his 12 foot long puzzle that 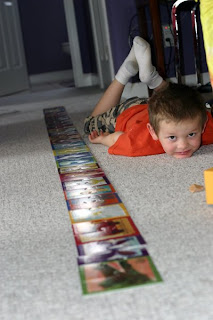 we brought back from our NYC trip last fall. Philip has been enjoying doing things on his own alot lately, usually building with legos or playing with a small pirate ship that he frequently lugs back and forth from his moms.

It's interesting to watch the ebb and flow of their interaction with each other. Last summer, Philip and Elizabeth were inseparable, playing their games of make believe. This summer, Paul and Elizabeth are inseparable, constantly on hunts for various rocks or other treasure, batting ideas for explosive science experiments between them.
Posted by Joy at 1:56 PM