So, I think I bit off a little more than I could chew this week. As is typical of the last weeks of school, th

ere have been various violin recitals, field days, etc. going on at both Paul's and Elizabeth's schools. In between all of those activities, I also volunteered to help the entire first grade at Elizabeth's school dye silk scarves using a technique called low water immersion dyeing.

Before I could fill my dye bottles with the pink, blue and yellow needed for the school project, I had to dispose of some odd colored dye th

at was left from previous projects. So I tie-dyed a few shirts, which turned out beautifully, using the rest of my dye. (Finn actually wore the orange one today.) The next night consisted of refilling bottles with dye, mixing TONS of soda ash solution to set the dyes, and cutting the tops off of plastic milk jugs so I'd have something to dye the scarves in. Then I sat back and tried to relax at the notion that the next day I'd be taking hazardous chemicals into a school to use with a bunch of exuberant first grade art students.

The morning unfolded as frenetically as I anticipated. I now understand what The Sneetches were going through when they went "off again, on again, in again, out again, through the machine and back round about again". After finally managing to get all 60 scarves dyed, I went off to work for about an hour, then I returned to school to rinse them and take them home for washing. About ten of them needed touching up. Six loads of laundry later, they were all rinsed and set. Wow! What vibrant colors! After I brought them all downstairs and dumped them on the couch to fold, Paul said it looked like a hippy vomited all over our couch. Indeed! 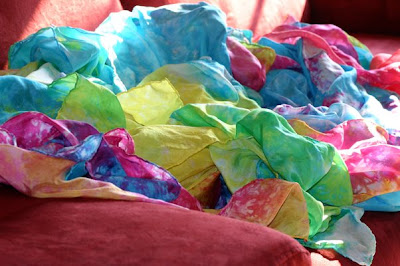