Yarn Along and a fable

This week's yarn along is an atrocious picture (we've had rain and bad lighting for 2 days), but I'm working on a cape for Elizabeth in a soft lavender yarn that's been fun to work on. With St. Patrick's Day coming up tomorrow, we've been reading from A Pot O' Gold. The Irish stories and poetry in this book helps make the week a little greener. :) 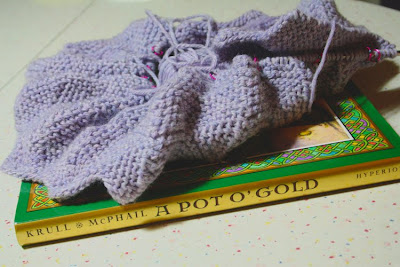 I've also been meaning to share the fable that Philip had to write for school last week. He's been studying fables in language arts and each of the children in his reading group spun a wheel to choose a character trait, an animal and a moral. He chose boastful, a rabbit and "nobody likes a quitter".
{Mr. Rabbit applying for a job at the tomato factory} 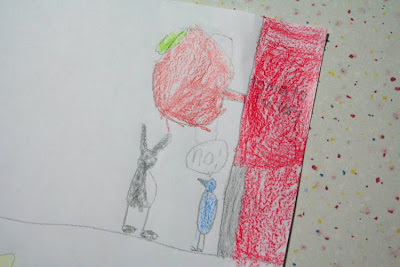 Here is his story:
Mr. Rabbit
Mr. Rabbit and Mr. Bunny were brothers.
Mr. Rabbit was boastful because he was
rich. Mr. Bunny was not. One day, Mr. Rabbit
quit his job because he didn’t get enough carrots
to eat on break time. Then he went to a store that
made celery instead of carrots and he asked
if he could come and work there. But the boss of
the celery factory said, “You cannot work here because
you might eat too many celery sticks on break.” So Mr.
Rabbit went home and boasted he could just get another
job. The next day, Mr. Rabbit went to ask the boss of the
lettuce factory if he could work there. But, of course,
the boss said, “No.” So then that afternoon, he went and
asked the tomato factory’s boss if he could work there.
But the boss said, “No.” The next morning, he went and
asked the boss of the cucumber factory if he could work
there. But, as usual, the boss said, “No.” So then he had to
stay home with Mr. Bunny and they were very poor
because Mr. Bunny was the only one who could work.
The End
The moral of the story is: Nobody likes a quitter.
{Mr. Rabbit and his dwindling pile of gold} 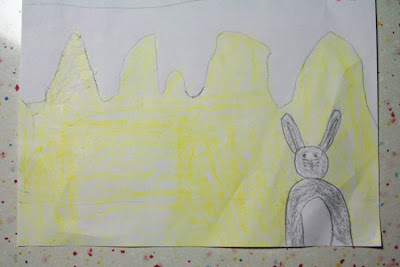 I thought this was a wonderful exercise in the art of telling fables and really liked the story that Philip wrote. What a fun way to learn more about fables!
Posted by Joy at 7:12 AM