After letting Finn's sprouts grow for almost a week. We decided to harvest some of them yesterday for dinner. The picture below was taken yesterday morning 6 1/2 days after the initial soaking of the beans. Finn's mung beans sprouted in about 24 hours were rinsed every 12 hours following the initial soaking. 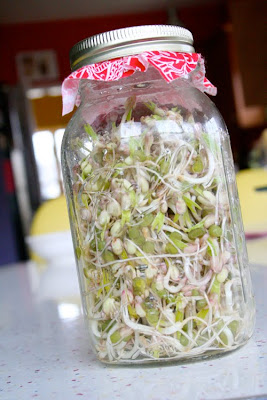 The sprouts increased in volume significantly each day and you could easily see the level of the sprouts rising in the quart jar. I initially thought the quart jar might be a bit of overkill for a mere 1/4 cup of mung beans, but as you can see, they completely filled the jar by the sixth day. 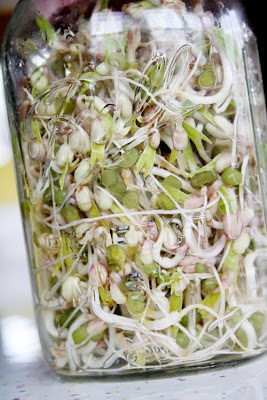 All of the kids, save Elizabeth, our least adventurous eater, were excited to try the sprouts so we trimmed and washed our sprouts and lightly patted them dry. 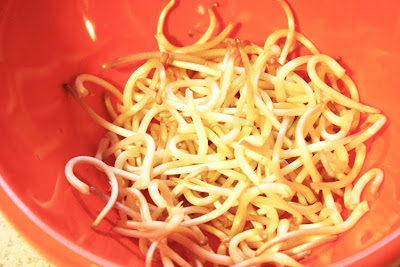 Our stir-fry has never looked better than with a sprinkling of fresh sprouts on top, and the added crunchy texture was a lovely addition to each bite. Not to mention, I was excited about the added vitamins, minerals and amino acids to our dinner. 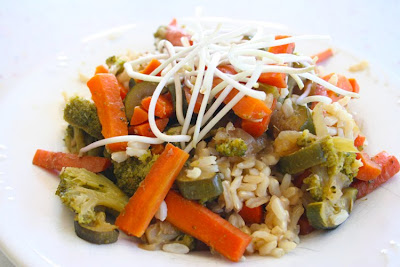 We still have quite a few sprouts left so I might try adding them to our green smoothies next. Smoothies are a great way to get all kinds of healthy things into our kids so we drink them frequently. It might not be as beautiful as our stir-fry, but those sprouts will be eaten for sure! 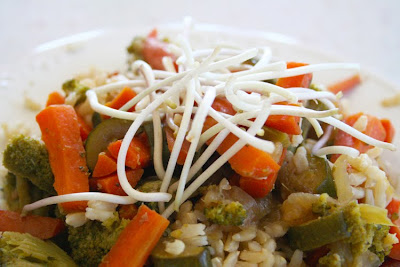