Elizabeth's school is on spring break this week, which of course, is on a different schedule with the boys' school and Finn's school. Since she's the only one around this week, we decided to make it a rainbow week based on Little Acorn Learning's free rainbow week Ebook.
Elizabeth can certainly have her own ideas when it comes to art, crafting, reading and even wandering around in nature, so I'm sure we'll use some of the ideas from the book, and Elizabeth will supplement with plenty of her own. To get her excited about the week, I spent some time this weekend burning a design into a wooden ring and making a rainbow dancing ring for her. 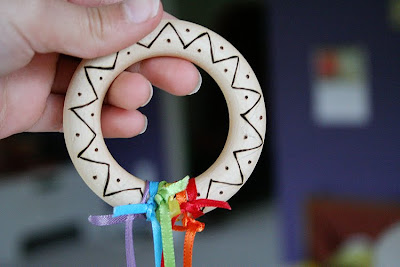 She enjoying watching me work on it and was thrilled when I finally finished. She immediately asked, "where's your camera?" and took a few pictures so she could dash outside to dance with her rainbow ribbons streaming behind her. (The first 3 pictures in this post are credited to Elizabeth.) 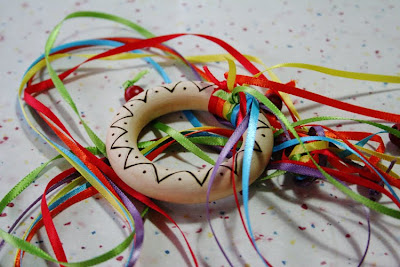 We didn't have any rainbow beads or beads of enough colors, so we just decided to use some red wooden beads at the end of each rainbow ribbon. I don't think the red beads detract from the rainbows though. 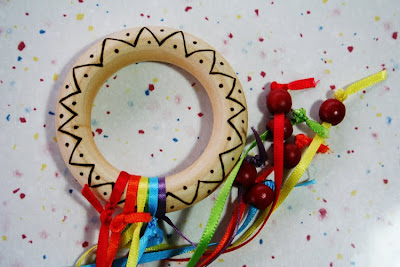 During a break in the rainy weekend, she took the rainbow dancing ring for it's inaugural spin. 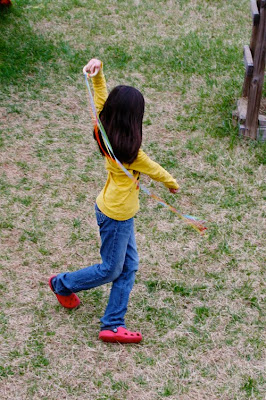 Do you ever watch your kids and wonder who those little people are in there so different from yourself? Elizabeth is my graceful dreamer. She marches to the beat of her own drum, and I forever wonder what her world must be like, so different from my very organized, practical, and accomplishment-driven one. 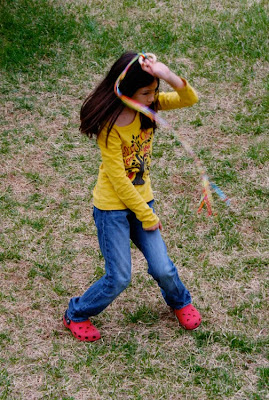 I also quickly knitted up a new rainbow hat for the week since our cooler temperatures returned. In addition to her dreamy personality is a real penchant for losing hats! I knit more hats for her than all 3 boys combined. Most of them come back around again, but you never know quite when they'll return. 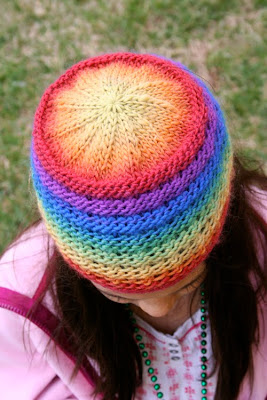 This pattern is Soulemama's Hat of Choice knit in the adult size with an extra repetition of the pattern, but on size 8 needles. The colorway is Knit Picks Chroma Worsted in prism. The gradual merging of the rainbow in this colorway is just lovely. The hat only used a half ball so I'm thinking mittens, maybe, for the other 1.5 balls I bought. 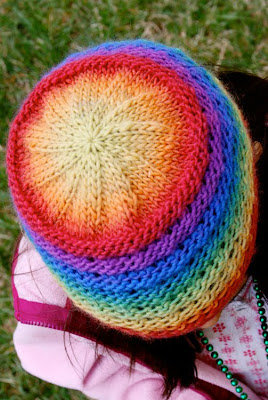 She became a little self-conscious when I took pictures again today of her dancing with the rainbow ring and wearing her rainbow hat. "Mom!" 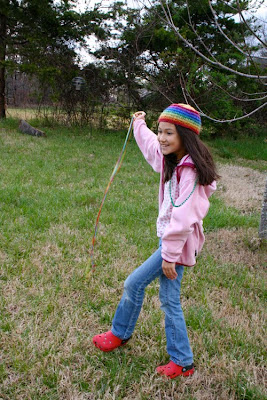 And down went the rainbow dancing ring...but it's only the beginning of rainbow week so I'm sure it won't stay there for long. 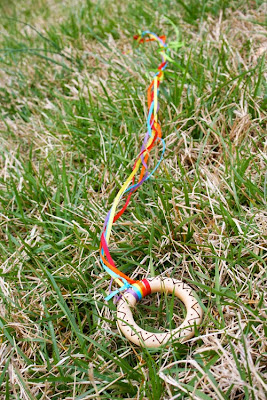