the snowstorm that wasn't

For days, the weather forecasters in our area have been calling for a snowstorm to hit our area today. In anticipation, school were cancelled in most of our surrounding counties before the first flakes ever hit the air (which is a typical reaction in the south especially counties with lots of rural schools). We had a relaxing morning with Custardy Popovers from The Moosewood Cookbook and a glowing fire in the fireplace...and we waited.
At about the time school should be getting out for the day, the table on our back porch had barely a dusting. Several of the counties around us had a few inches already so it seems the storm itself was a little unpredictable. 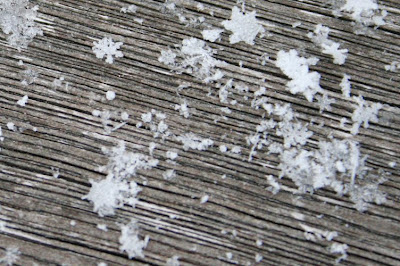 Elizabeth and Paulie didn't mind. They spent a while examining the flakes, a la Snowflake Bentley, then they laid in the backyard waiting for the snow to blanket them. When that didn't seem to be happening very quickly, they just opened their mouths and had a snack. 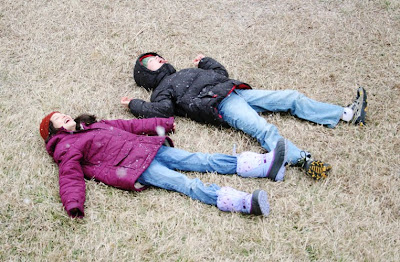 We did spend some time tackling a few winter projects that I've looked forward to trying. A couple of them needed to sit overnight so I'll have to share tomorrow, but we did manage to string some dried orange slices that were finished today. 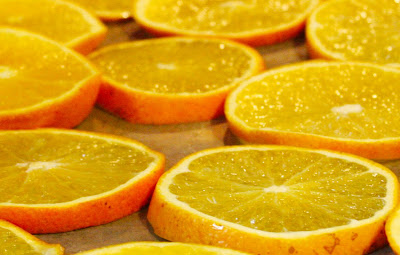 The orange slices took about 4 hours in a 200° oven to dry and only about half of them were completely dried at that point. I decided to let the rest completely dry after they were hung. Paulie and Elizabeth strung the dried slices on doubled sparkly thread. 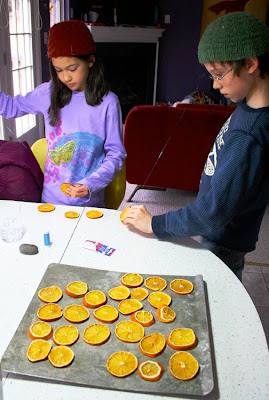 They were so beautiful hanging in the window with the last of the afternoon light beaming through the translucent sections. 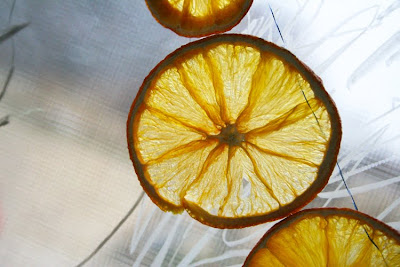 And I enjoyed them hanging in the view of the kids running around in the falling snow this afternoon. You can barely see the kids in the yard between the orange slices and the window coloring. 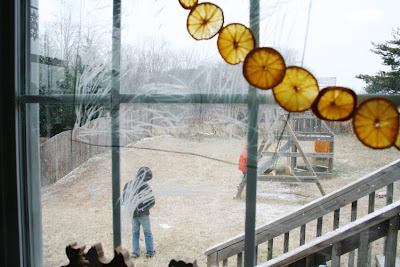 I didn't even notice until after the oranges were hung that they made a winking smiley with the stars in the window. 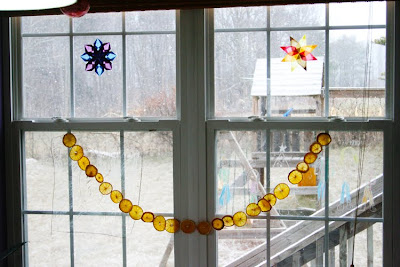 A winking smiley in the window might just make up for the lack of snow outside. ;)
Posted by Joy at 8:32 PM