Something about turning 4 struck a chord with Finn, and he now deems himself a "big boy". He seems to have experienced a real mental shift that has boosted his confidence and caused him to reconsider things like asking to be carried part of the way on a hike. We've given him no pressure on his newfound maturity, but I am interested to see how far it takes us! 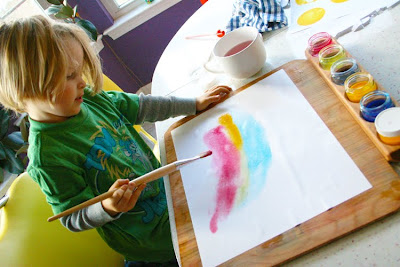 Along with his newfound maturity, I've been pleasantly surprised at his intensity around his work recently. Since Christmas and the influx of art supplies it provided, Finn has been occupied at the kitchen table for some portion of each day. Wet-on-wet watercolors, ink stamping, coloring, and free-hand drawing are his most common choices of work. 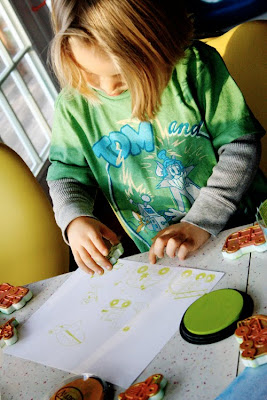 On the suggestion of a friend, we began making a calendar book for the year of 2011. Each month, I'll take a picture of Finn on (or around) the first day of the month, and we'll print out the next monthly coloring sheet from Jan Brett's calendar. Right now we're keeping our sheets in a folder, but at the end of the year I intend to bind the sheets into a book for Finn to reflect on the months. 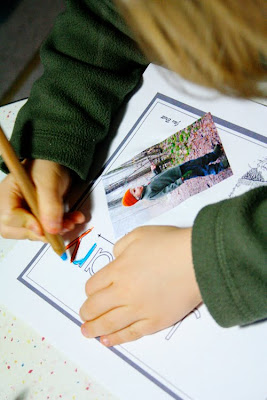 After each monthly sheet we'll read the corresponding month in Around the Year. My hope is that by the end of the year, he'll know the months by name and have some concept of the length of time in one month. 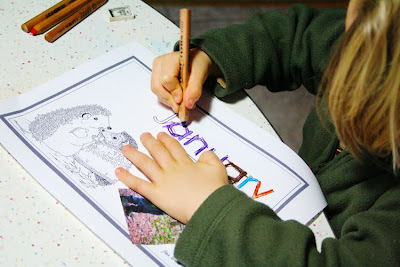 Away from the table, Finn has been working on more complex puzzles, including a few new ones he received for Christmas. 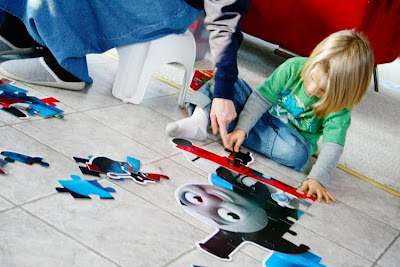 And he's putting together his own train tracks. He's even exhibiting less frustration when the bridges fall down and he's forced to rebuild. 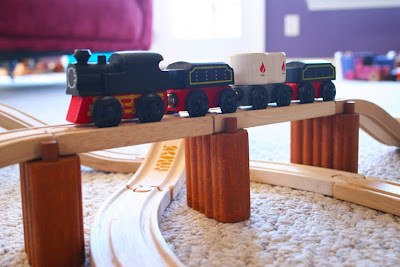 I'm so proud of the hard work he's doing and the initiative he's taking toward maturity!
Posted by Joy at 11:22 AM