There's more than one way... 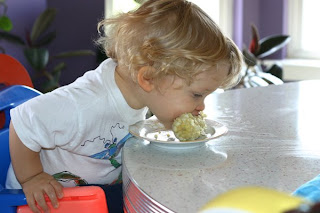 to eat corn on the cob! At least that's what Finn was discovering as he tried out a few different ways. He tried pinning it to the plate and eating it with no hands. He tried opening his mouth as wide as possible to get many kernels at once. He even tried eating it like a hotdog. 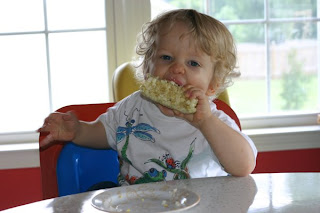 We bought a couple dozen ears of fresh corn on the cob at the farmer's market the other day which is one of Finn's favorite dinner treats. (Apparently the news reports have been true about the price of corn this year due to the ruined crops in the midwest. Yikes!) He thoroughly enjoyed his ear as you can see. :)