Elizabeth and Paulie were both 4-5 years old when they first started playing with regular sized legos; Philip was more like 2-3 because Elizabeth and Paul had legos for him to borrow. Actually when Elizabeth was 4, she was so immersed in 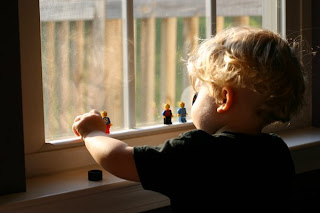 the lego table at her preschool that we got her a lego table for Christmas. Of the older kids, Philip has probably shown the longest continued interest in legos. He's also the only one who will sit and patiently put together a lego set that's meant to build something particular like the lego Star Wars ship that Paulie had gotten a couple of years ago but never took the time to complete.

Finn, in typical baby-of-the-family fashion, has been fascinated with legos since he was barely a year old. He had already been playing with the mega-blocks for a few months, but the big kids were more interested in the ones in the lego table so he decided they must be more intriguing. Initially, we would only let him play with them when one of us was present, but he's never put them in his mouth or otherwise played with them in a manner that would cause concern. At this point, he plays with them frequently, although Philip occasionally reminds us that the lego container has a picture of a baby crossed out which means Finn should NOT be playing with them. Lego men are, I think, typically the favored lego pieces, and Philip received about 30 of them in his stocking last year for Christmas. Finn has taken a particular shine to the men and occasionally manages to pilfer them downstairs without anyone observing. Finn also has a strange fascination with playing in the window sill so when I noticed the lego men being lined up in the sill, it was definitely a Kodak (or Canon) moment.
Posted by Joy at 11:00 AM