Reading in the Rain

The night before Paulie left to head down to SC to visit grandparents, we went ou

t for dinner at Bear Rock Cafe. (Gotta love Kid's Eat Free night when you've got 4!) We planned to head to the park for a walk after dinner, but of course, the weather did not cooperate.

Since there is a Barnes and Noble right down the parking lot, we decided to head there for a few minutes instead. The older kids spent several minutes perusing the various books of interest. Paulie picked out a sport-themed book that he was interested in, which I secretly purchased for his trip. Elizabeth looked briefly at the Magic Tree House books then buried her nose in picture books for the rest of the time. Philip flitted from one picture book section to the next then asked, in typical Philip fashion, if we were going to buy any of the toys (the marketers so helpfully station around the bookstore). Finn was mesmerized from nearly the beginning with the train set.

Nestled in a cove (surrounded by other toys, of course) was a wooden train and track, completely set up, and Finn was sucked in immediately. He spent probably 20-30 minutes never even checking to see if Paul or I were still nearby; he was so captivated by his new discovery. Predictably, when it was time head home for baths and bed, Finn wailed the entire way out of the store. How devastating to be 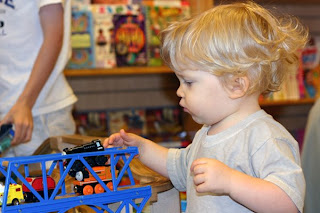 ripped from his new-found train love! Can anyone guess what's on Finn's Christmas list this year? (which is rather convenient considering the neglected train table currently sitting in our garage)
Posted by Joy at 9:17 AM