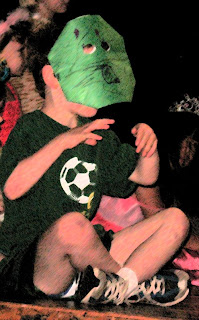 Philip's class in preschool, in a markedly ambitious mood, decided to write and star in their own play. They performed the Big Show last weekend on the Big Stage. The part that Philip wrote for himself was Zip the Silly Dragon. Several dragons were written into the play. Their parts largely consisted of chasing the princesses back to the castle, but it was an adorable glimpse into the creative imagination of preschoolers. I especially loved watching Philip race around with his spiny plates just hanging by his side.

I am amazed by how closely their vein of creativity runs at that age: the girls wanting to feel special and princess-like, the boys wanting to either be the antagonist dragons or superhero rescuers. I remember when Paul spent 2 years rarely separated from his Superman outfit, and the princess 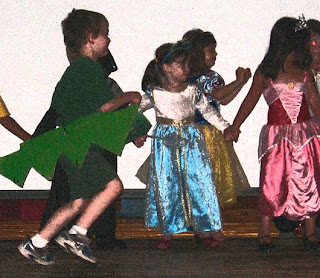 dress that Elizabeth wore endlessly during her fifth year. I wonder whether Finn will be similarly influenced by his peers at that age or will the superhero/ villain stage pass him by as he tries desperately to keep up with his older siblings.
Posted by Joy at 7:46 PM