You're not supposed to eat the finger paint? 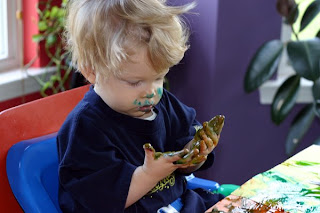 Finn's first fingerpainting experience could best be described as tentative. I squirted some blue fingerpaint on his construction paper, and he stared at it. So I tried to show him what to do by dipping my finger in and rubbing the paint on his paper. He tentatively got a small amount on each hand and wiped it on the paper. After seeing his messy hands, he tentatively brought his hand to his face, then tentatively stuck his tongue out to meet his hand. Realizing this mess was not much related to the usual mess that happens at the kitchen table, he then promptly wiped his hands on his shirt and pointed at the next bottle of fingerpaint. I squirted some orange on his paper. He then started rubbing paint around for about 3 seconds before pointing at the green paint. He repeated the same ste 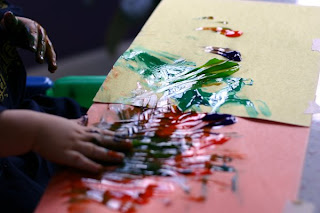 ps then pointed at purple. At the rate he was going, his paint would have run out in about 5 minutes. After trying to encourage him to keep rubbing the paint around on his paper, and him becoming increasingly concerned about the state of the mess on his hands, we decided that fingerpainting was a fun if brief activity today. :)