You never quite know how things will go when you decide to be a guinea pig for something.  And letting your child become a guinea pig is a whole 'nother ballgame.  But when we signed Elizabeth up to be in the inaugural 6th grade class at her arts-based charter school, we knew a bit of what we were getting ourselves into since she'd been at the school since kindergarten. There have been a few bumps in the road, as new projects often have, but largely this first year of her middle school experience has been wonderful, an arts-rich extension of her elementary school experience really. 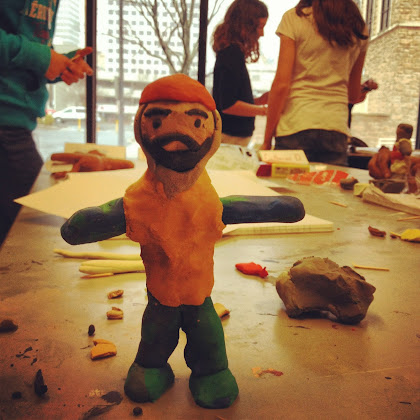 Yesterday I had the privilege of helping Elizabeth's class take a trip to the local arts center to work on the claymation portion of their 6th grade project. Each of the group has a figure and event relating to a historical conquest or invasion and they worked together as a team to figure out which section each of them would tackle to form the cohesive claymation scene. 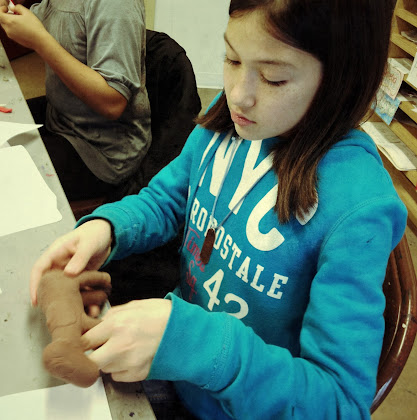 The entire project is quite amazing. The arts coordinator explained so eloquently in the school newsletter that I'll let you read her take on the project.

The new core and essential standards adopted by the state of North Carolina require that 6th graders study key historical figures and events, conquests and invasions, technology and geography of the pre 1940s. Maps, charts, graphs, physical environment and economic activities of various civilizations are to be studied, but the standards require that they “should not be taught in isolation, but woven together in an integrated study that helps students better understand the ancient world.” The standards do not, however, suggest how this might be accomplished. ABS has chosen the platform of film-making for this complex, integrated study. Our sixth grade students will create documentary films about leaders of major world invasions prior to the First Global Age (1450.) To prepare for a red-carpet movie premiere on April 10th at a local theater, the students must manage many interwoven strands of learning.
Film-Making: A skill that transfers into everything from advertising to doctoral theses, film-making is the ultimate in collaborative art. Directing requires a blended and visionary understanding of visual composition, sound and music, acting, writing, light, psychology, management of human and physical resources, time management, computer technology for shooting, storing, and editing, and marketing.
Social Studies: Each student film crew of 4 or 5 students focuses on the life of one of the following leaders: Genghis Khan, Alexander the Great, Ramses II, or King Richard the Lionhearted. They study events and challenges that motivated each leader, the innovations that helped them lead, the social significance of events precipitated by their invasions, the geography of world regions and how this impacted their decisions and technology.
Writing and research: The art of documentary film-making requires considerable research and writing, pulling facts and distilling meaning from various written sources. Each film team selects a documentary “voice”. They write narration, scripts for live-action sequences and simulated clay animation battle scripts. Every student participates in the research and writing.
Science: Introduction to atomic science through direct instruction, hands-on metallurgy class, and computer animation classes help students understand and diagram what happens to molecules as they are subject to heat and cooling. Films will include footage about how this science applies to the creation of ancient weaponry.
Geography and geology: Research into regions where ancient battles took place help students understand strategy and development of technology. Students draw and paint maps and landscapes to be used in the film. They are introduced to the  importance of examining topography when strategizing for battle.
Drama: Through dramatic portrayals, students learn that even ancient invaders were vulnerable humans, and that some of their struggles reappear in the world today. They study the art of stage combat, using replicas of period weaponry. The quality and diction of the spoken voice is coached for each scene or recorded narration.
Visual Art : Clay animation scenes reconstruct pivotal battles. Students study watercolor technique, research and paint landscapes for backdrops, maps and portraits for still shots. Students also draw storyboards for the overall film and the clay animation battle.
Music: Students select and edit soundtracks music. They record and edit their own dialogue, voice-overs, and sound effects at Ovation Sound, a professional recording studio, where they will also review previous learning about soundwaves. 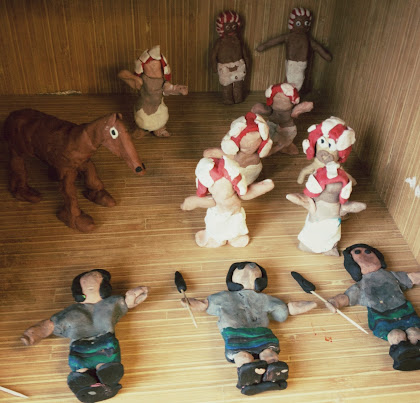 In addition to the instruction they receive from their teachers, the students will have access to the following local venues, accomplished artists, and college level instructors. 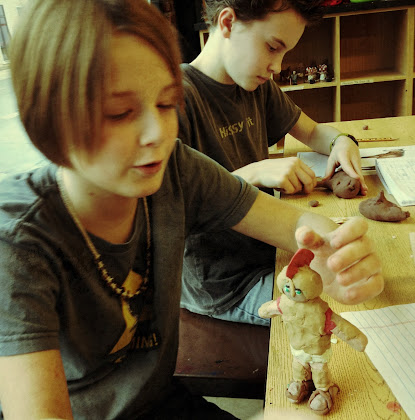 Being a guinea pig may not always be everything we wish it could be, but in this case I feel very fortunate that Elizabeth gets this experience and an opportunity to help develop this program for other 6th graders behind her. Lights! Camera! Action!