The most common question I've gotten in the last 24 hours, both on my blog and elsewhere, is what we're going to do with all those apples. Thankfully, I received an apple peeler, corer, slicer for my birthday. I actually had one ages ago which disappeared in a move, and I have to say that I sort of prefer the clamp of my old one rather than the suction cup base of this one. The suction only last for 3-4 apples then I would have to re-stick it, which is a pain with apple juice covered hands. Either way, this is a fabulous invention because it takes infinitely less time to process the apples this way! 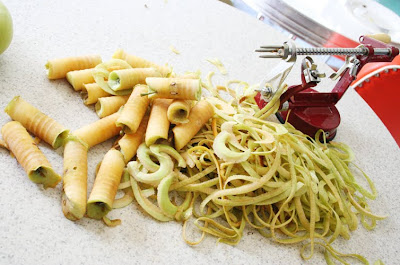 And it has the added benefit of pleasing the kids. You can see Paulie in the background eating one of the long strings produced by the peeler. 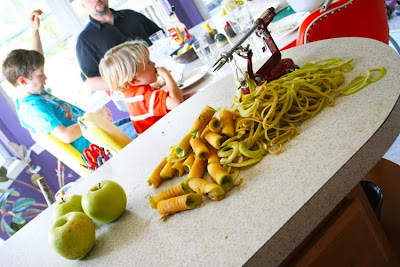 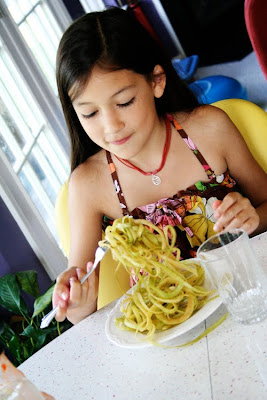 Meanwhile, about 12 lbs of those apples made their way into my dutch oven and are trying to become apple butter. They've been simmering for about 9 hours already, and I'm expecting that a few more hours in the morning should finish the apple butter so I can jar them on my lunch break (ahhh, multitasking!) 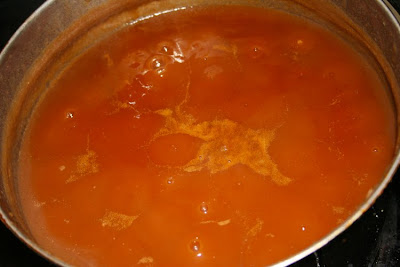 The rest of the peeled, cored, sliced apples made a large pot of applesauce last night and went into 16 quart bags so far to make applesauce in the winter. I'm hoping to have 25 quarts of frozen apples when I'm done and about 3/4 of a bushel of apples left for eating. We are certainly enjoying our crisp, sweet bounty! 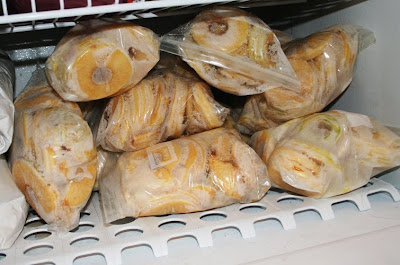 PS. I sort of made up my own recipe for the apple butter. I used 12 lbs of apples (which was 25 large apples), 2 cups apple juice, 1/2 cup brown sugar, 1 tbsp cinnamon and 1 tsp cloves. Cook over medium heat until the apples break down to apple sauce, process in blender and return to pot. Simmer for 9 hours and counting. :) I'll keep you posted on how much apple butter I end up with from this batch.
Posted by Joy at 8:43 PM