After attempting to learn to knit on my own last year, I finally broke down a took a knitting lesson at a local yarn shop.  Actually, Elizabeth and I took a lesson together on a day off from school last week.  I finally seem to get the hang of casting on, knitting, and casting off.  Yippee!  Now I can expand my yarn creations from crochet only.  Finn has become increasingly interested in participating in working with yarn.  He adopted my first washcloth-like knit piece as his practice piece. 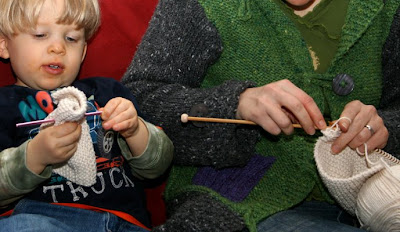 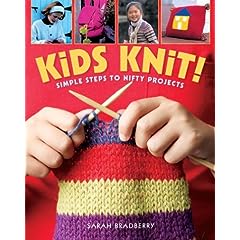 Now that I've gotten the basics down, I got this book from the library to help push my skills a bit further.  I was a little bit afraid of the adult books so I thought Kids Knit! might be less intimidating, since I have no desire to frustrate myself to the point of giving up again.  This book as some really simple projects geared toward practicing which is exactly what I need.

As for Elizabeth, she was so intense in her effort that she ended up with really tight stitches making every stitch a struggle.  She's decided to take a break and maybe we'll take another lesson later in the spring or summer.  In the meantime, I've ordered the knitting mushroom from Three Sisters Toys to give her a bit of push in the right direction with out the pressure and tension of the needles.
Wish us luck!
Posted by Joy at 6:08 AM