Now that we're home for a few weeks this summer, we decided to spend some time visiting Ancient Greece!  I found a few books at our local used book store and the library and bought one textbook (that I intended to use when I planned to homeschool Elizabeth this year).  In addition to spending some time every day reading aloud Ancient Greece: An Interactive History Adventure (my kids love those choose-your-own-adventure books), we've also been working on some interesting projects.  We've kept the flow flexible and the activities fun because I really want the kids to enjoy what they are learning. 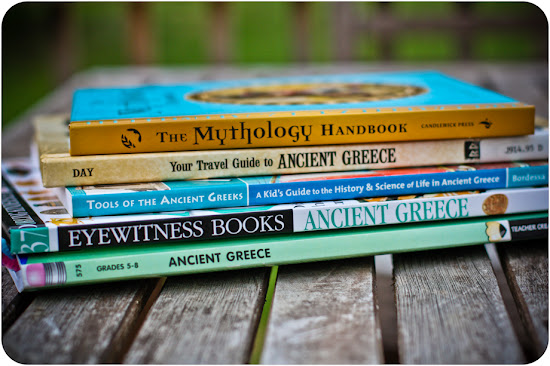 The first project that we made together were some vases, pitchers, and bowls modeled after the ancient Greek ones that we saw in a few of our books. 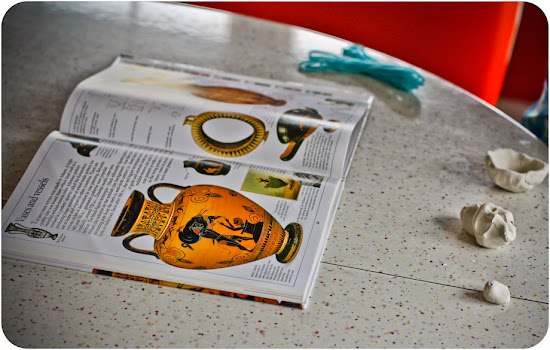 We used sculpey so that we could bake our projects and they would harden into sturdy vessels. 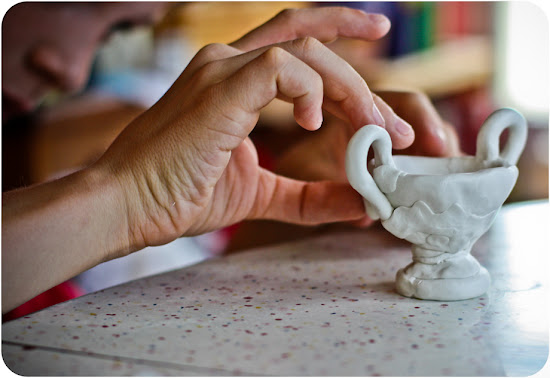 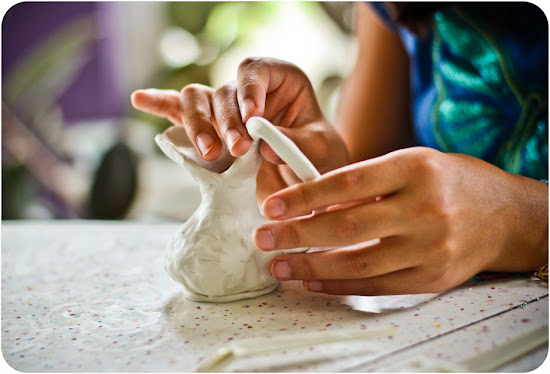 When the projects were finished baking, the kids decided to paint them with tempura paints.  The colors weren't exactly in keeping with the ancient Greek models, but they sure are beautiful! The vessels belong to (from the left) Finn, Philip, Elizabeth, and Paul. 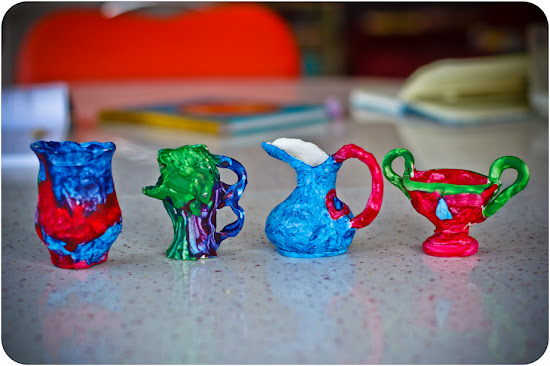 We also have spent several hours, together and individually, reading Greek mythology.  I found it funny that when I sent the kids to put on togas, they immediately started acting out a myth.  Paul is Zeus, and he's being bowed to by Aphrodite, Poseidon, and Dionysus. 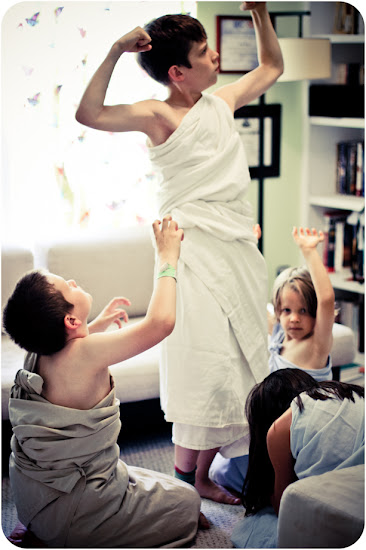 Actually, the togas were for our Greek symposium.  Earlier in the day we read about Greek life and culture and discussed foods that ancient Greeks would eat.  We gathered some finger foods and had a symposium for our noon meal. 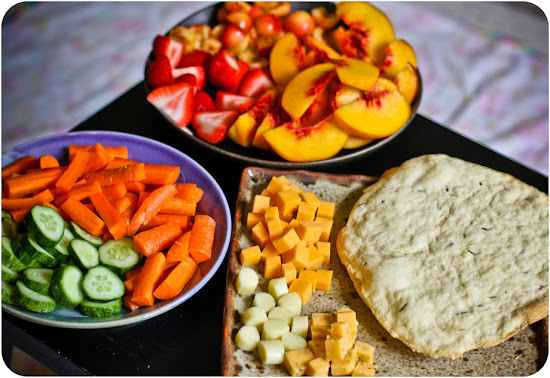 We also had a vessel of wine (or cranberry grape kombucha as the case may be). 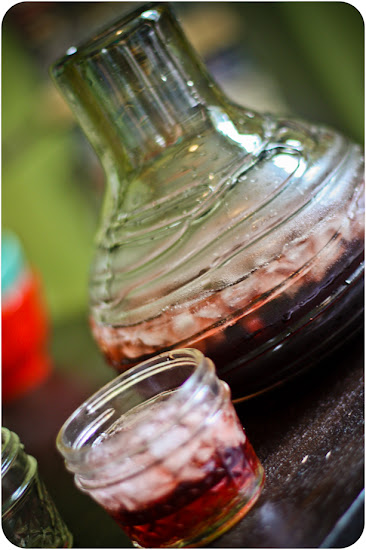 Each of the children took turns entertaining us while we ate.  Finn chose to play the "lyre". 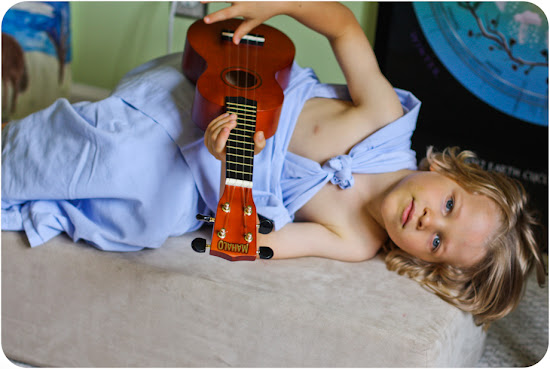 The older kids each picked out a poem from one of our children's poetry books. 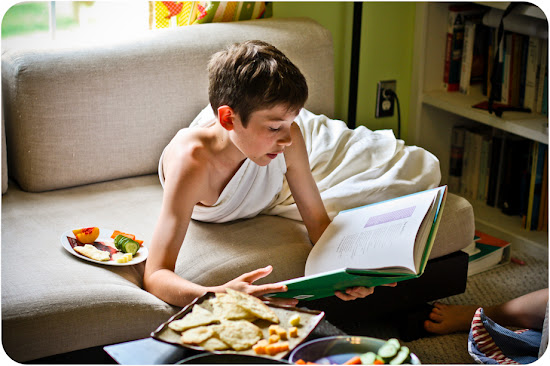 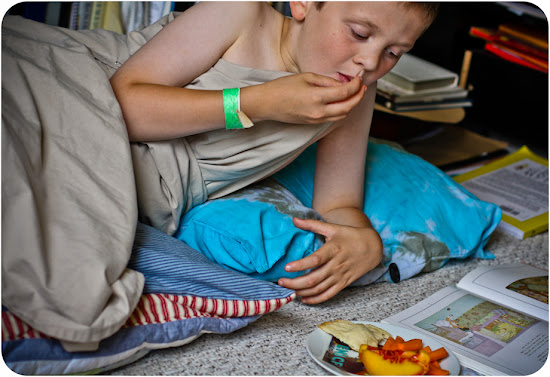 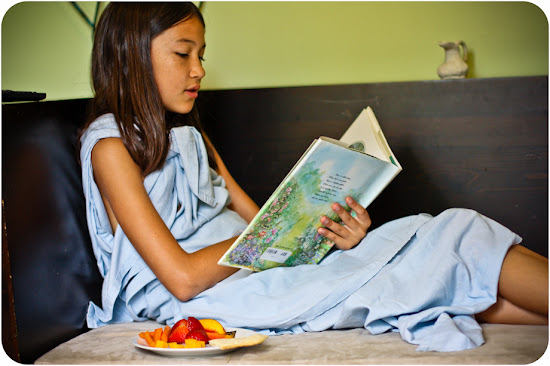 Another project that the older kids worked on together this week was writing their own Greek myth.  They collaborated for the better part of 3 hours stretched over half a day and created Denias and the Lion.

After Heracles left the Nemean Lion, the people of the village found that the lion had a child.  They immediately sent for help. Knowing Heracles was off doing other tasks, the villagers called for the second best person, Denias.

When Denias got the message, he set out immediately for the village.  He soon came to the Canyon of the Two Cyclopses. Then Denias realized that to reach the village, he must cross the canyon! Denias threw a rope across the canyon, hooking it onto a rock that was half-buried in the ground. After a few moments of hesitation, he climbed across the rope, the cyclopses snapping at his feet.

After crossing the canyon, he saw the Boiling Sea in the distance. The Denias realized that he had to cross the sea as well.  As he neared the Boiling Sea, he thought that he might persuade Poseidon to lend him a boil-proof boat.  And Poseidon agreed.

When Denias finally got to the village, he asked for a helper to defeat the lion. A man named Daedalus offered to help build some wings to attack the beast from the sky.  After the wings were built, Denias made a plan to fly up into the sky, soar down toward the lion, and crush him.  But the plan did not go as they wanted.  As Denias flew down toward the lion, the lion jumped backward.  Denias slammed into the ground, forming a big pit. Denias flew out, disoriented and half-conscious, just as the lion fell into the pit. Daedalus quickly covered the hole with rocks, dirt, and other strong materials.

Now the lion is still underground, throwing himself against the roof of his cave, trying to get out. His movements cause the earthquakes that we experience today.

We also enjoyed a meal of Greek food one evening, having some familiar, hummus with veggies and flatbread, and some less familiar, tabbouleh and Greek butter cookies.  We will continue this study for at least another week or two as we still have so many projects left that I think the kids will enjoy.  I'll be sure to update you later!