So...I mentioned yesterday that I was headed out of town to help a friend for a few days.  I'm now here in Greenville, SC, and assisting in any way I can while my friend, Jenni, helps care for her sister's children.  Her sister, who has been on the organ donation list for about 9 months, finally over the weekend received the heart, liver, and kidney transplant she needed so desperately.  In addition to the emotional upheaval in her family, Jenni's sister has 2 small children who are now staying with Jenni and her family, including 3 small children of her own.  Elizabeth, Finn, and I are here for several days to help make the load a bit lighter, if we can. 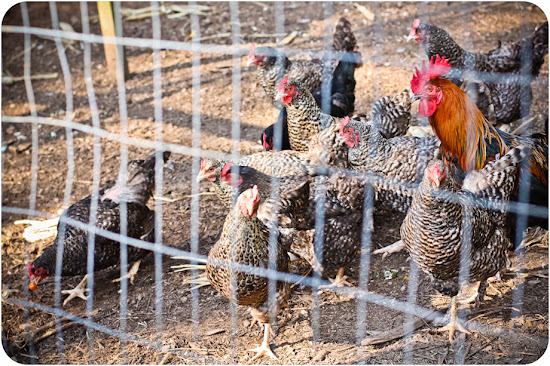 With 7 children in tow, we took advantage of the slightly cooler weather this morning and ventured over to Blueberry Hill, the aptly named organic blueberry farm that reminds me of both the book Blueberries for Sal, with a similar hillside covered in blueberries, and the song of the same name as the farm. And like Sal, our kids certainly "found their thrill on Blueberry Hill". 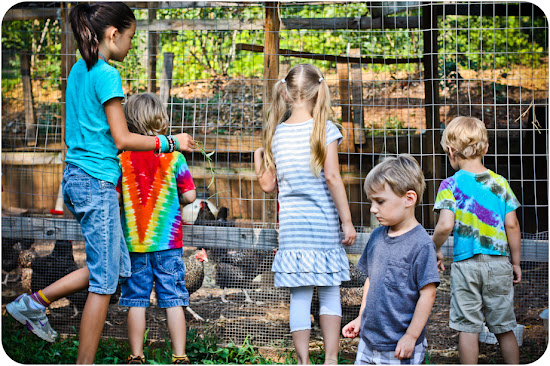 Maybe even a bigger thrill than the blueberries were the chickens that first captivated the kids. With their clucking, squawking, cockle-doodle-dooing, and chasing and fighting over cherry tomatoes and less-than-perfect blueberries.  They were quite entertaining to watch for a bit. 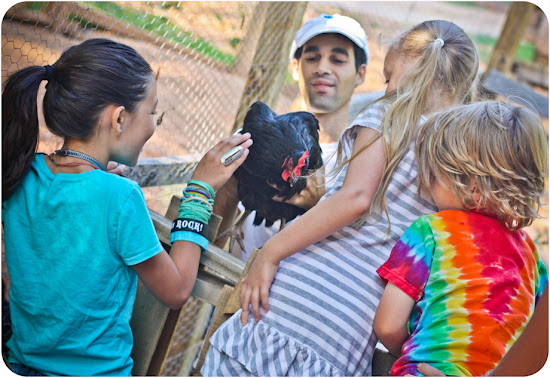 The farmers let our kids hold and pet the chickens, even a few of the "teenager" chickens with their awkward, gangly bodies and feathers. 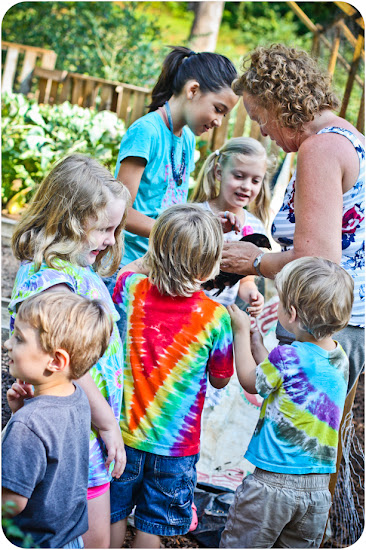 After the kids had fed them bits of grass, tomatoes, and some blueberries, we headed over to the hillside to pick our fill of blueberries. 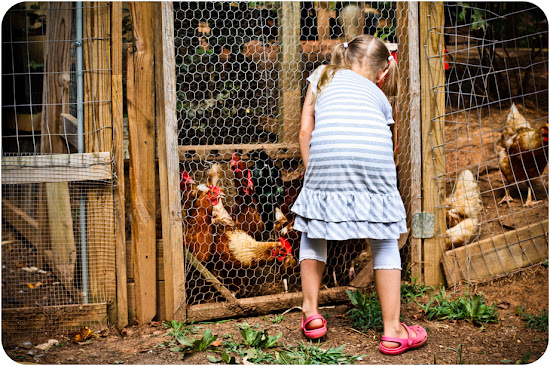 (The baby is still smiling; so far so good!) 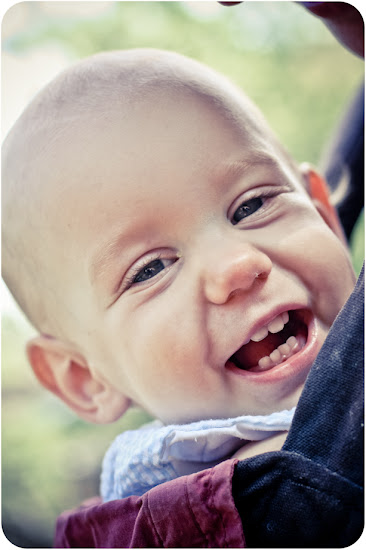 We began picking and quickly found several bushes so full that I picked almost a quart on just a single bush. 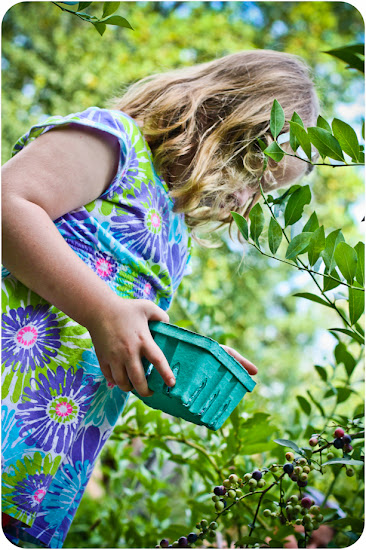 We took advantage of the kids' excitement over the loads of blueberries and picked as many as we could quickly before the heat set in and enthusiasm waned. 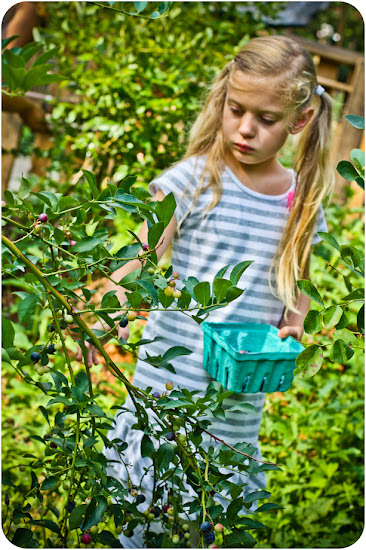 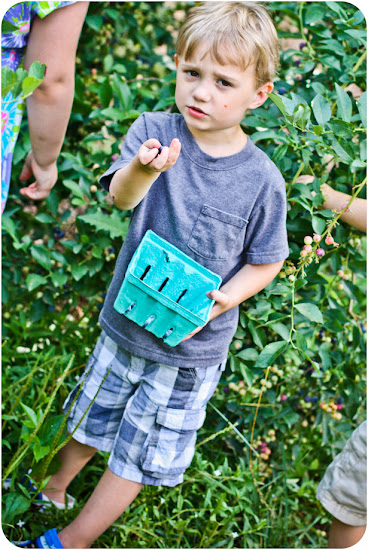 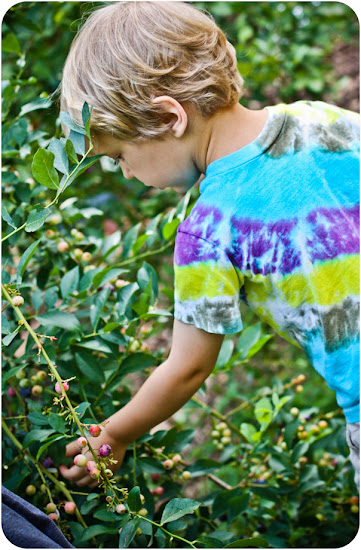 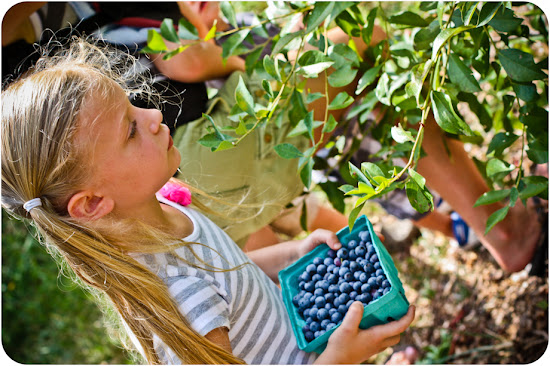 As each kid's basket hit around three-quarters full, the kids started begging to get back to the chickens. 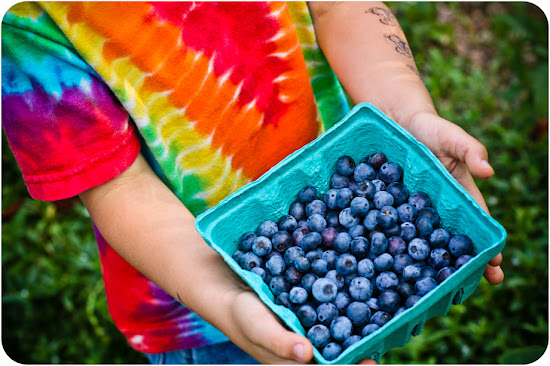 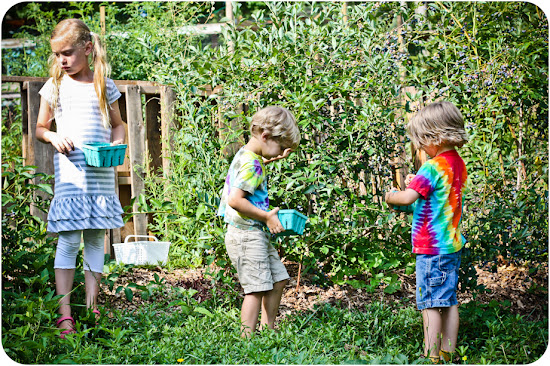 Jenni and I helped them fill the last little bit, then left them admiring and feeding the chickens so we could pick another couple of quarts. 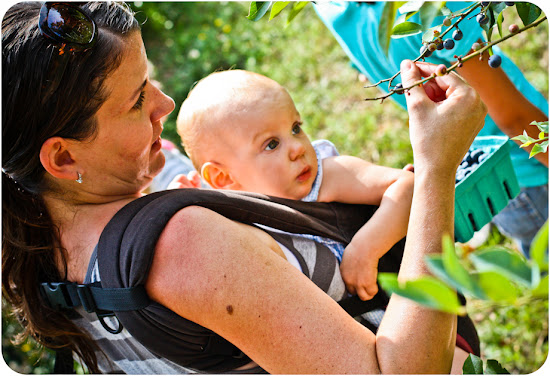 Occasionally we would catch a glimpse of our little blueberry thief, practically flipping over backward for a handful of blueberries.  She reminded me of the little bear in Blueberries for Sal, stealing handfuls of Mother's berries. 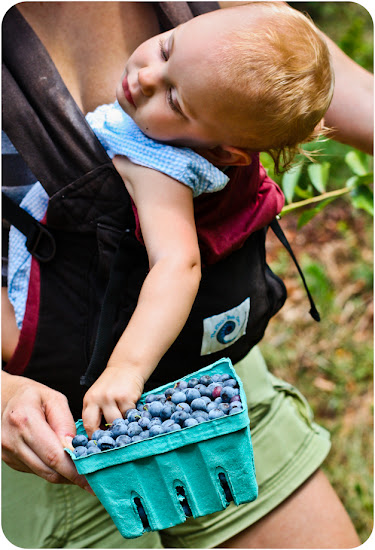 What a lovely time we had getting out of the crazy and busy rut of caring for 7 children and out into the fresh air and sunshine for a while!  There's nothing like some blueberry bushes and silly chickens to provide a welcome distraction during this stressful time.