Romeo and Juliet On The Border

Elizabeth's 5th grade production of Romeo and Juliet On The Border went off without a hitch on both Wednesday and Thursday nights of this week. Most of my week included attending rehearsals, helping fix hair, attending to makeup, mending costumes and generally anything else that was needed by the director, production assistant, teachers, or any one of the other amazing individuals who made this event possible. The children were breathtaking, and the event looked like something you would see from a children's theater or high school production, not just a group of 40 5th graders, many of whom have been studying and learning together for 6 years. 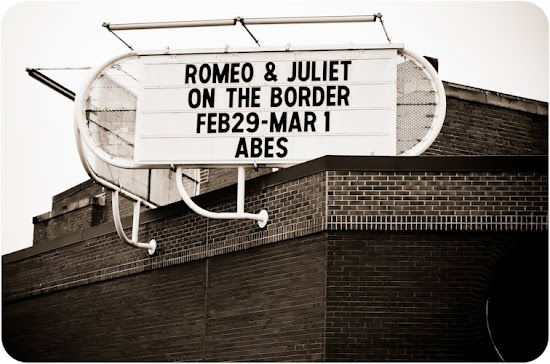 One of my favorite things about the school Elizabeth attends is the opportunity to tie every subject together into a valuable, effective and enjoyable learning experience for each and every student. Back in the fall, Elizabeth's class began studying the settlement of southern Texas in the late 1800s and the strife between the cowboys and Mexicans in the region of the Texas-Mexico border. They learned about the culture, foods, history, and many famous cowboys from that period. At the same time, they began studying Shakespeare's Romeo and Juliet, with a focus on Elizabethan language. Tying these two units together included drawing and watercolor painting horses in art class, studying Mexican dancing and line dancing in dance class, and learning traditional cowboy songs, such as Old Dan Tucker, Buffalo Gals, and Poor Lonesome Cowboy, and Cielito Lindo and other Mexican songs in music class. They tied all of these topics together with a play that they called Romeo and Juliet On The Border, and they learned and rehearsed every week since the beginning of January. This was their test; their living testimony to having learned the material covered in 5th grade during the last semester. 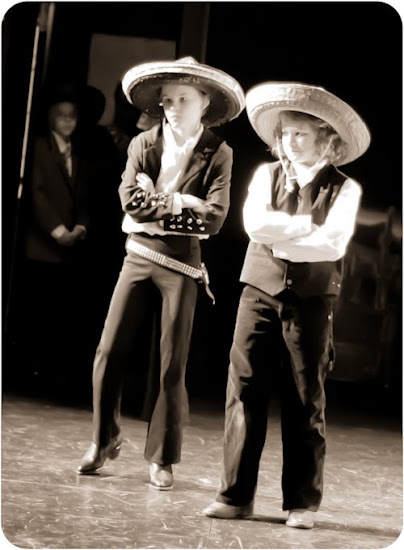 Mrs. Siebert, the arts coordinator at Elizabeth's school and director of the play, had this to say in this week's Thursday Notes about the process of learning drama at her school:

Perhaps listening and truly observing are the most difficult skills we acquire. Pretending to listen is easy. Adults often pretend to listen, while our attention is entirely removed. We aren’t so great at observing, either. We often drive the same route daily for years, without noticing the green house on the corner. We know this is true, and yet we expect young children to sit still, watch, and listen. 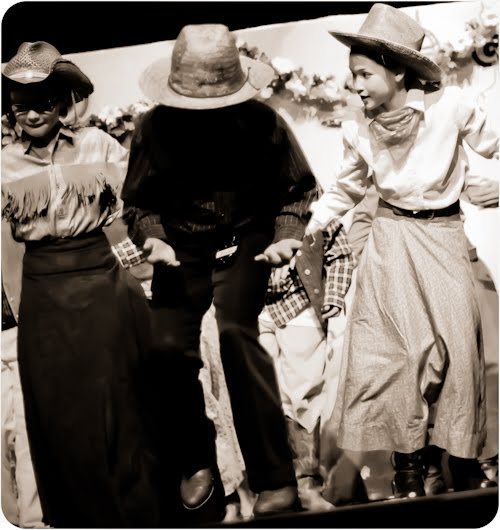 We should not be surprised to learn that most of them are only pretending to listen, and that only 18% of students are actually learning when a teacher lectures. Young children express themselves and acquire knowledge naturally through observation and hands-on experimentation, play-acting, dancing, singing, and making art. Therapists and even legal experts have learned that, through drawing and play-acting, a young child’s most inexpressible experiences may be most accurately reported. 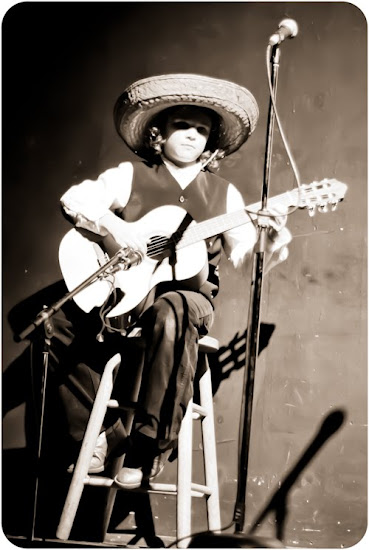 But although these means of artful expression and effective learning are often more skillfully developed than speech once Kindergarten begins, most schools choose to omit them from the classroom. Instead, students are suddenly expected to sit still and listen. For a student who wishes to please adults, it is natural then to play-act listening, without understanding. Sit still and look directly at the teacher with wide open eyes and nod comprehendingly from time-to-time, and you will be regarded as an excellent student. 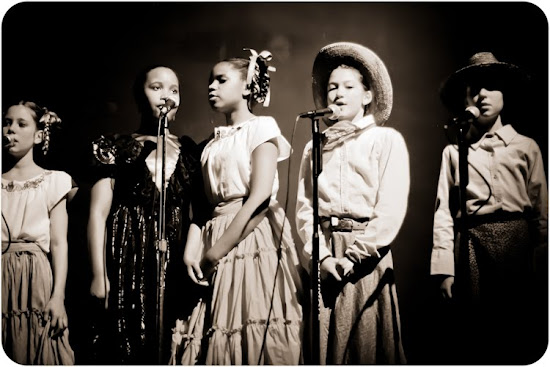 Interestingly, the most challenging skills in the study of drama are also listening and observing. Really listening, on-stage, not pretending to listen. 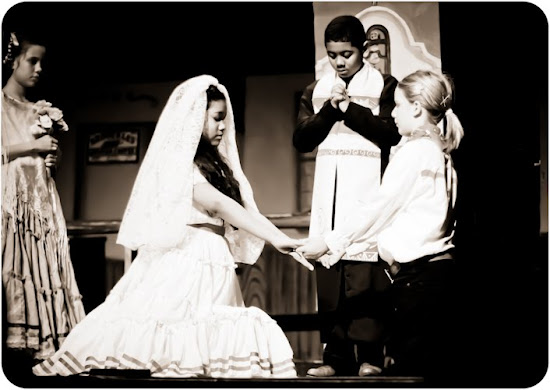 When you see a boring elementary school or amateur production in which stilted performers recite memorized phrases, that is not acting. Unless the actor is truly listening and observing on stage, no drama occurs. 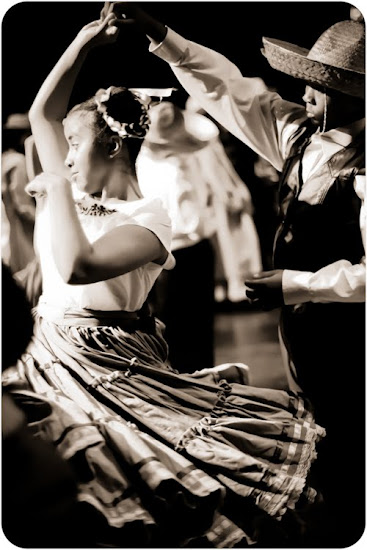 This aspect of the art of theater is not easily identified by the audience as a skill, but it is the most difficult thing to teach. ABES 5th graders have had the benefit of six years of study with “Mr. Bob”, who is an expert at bringing children into conscious presence through acting games. Even ABES teachers sometimes find Bob’s work baffling; fun, engaging, but hard to evaluate. That is the thankless aspect of the art of acting; people assume that the actor is either “talented” or not. 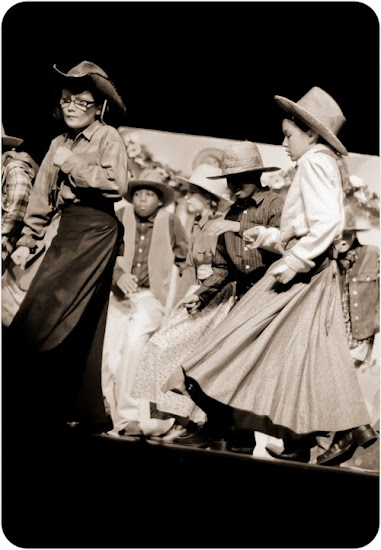 The amazingly engaging performance our 5th-graders delivered last night in Romeo and Juliet on the Border was possible because, through this work, the actors have learned to listen, listen, listen, and be actually present on stage. 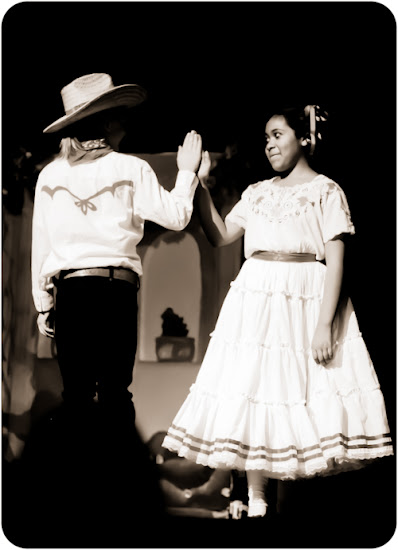 It’s not just talent, (though there is plenty of that in evidence too.) It’s a specific art form that requires practice. 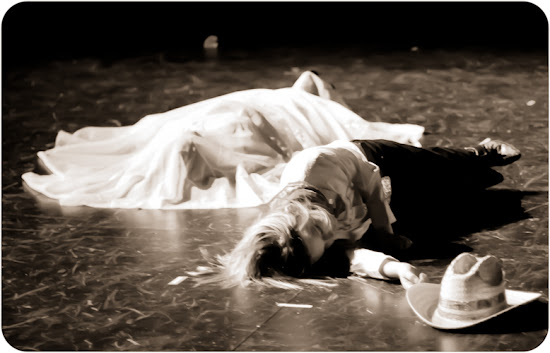 That ability to listen with focused energy will be available to these students off-stage too, when it’s time to listen to explanations of algebraic equations and sentence structure…unless they choose to pretend they are listening. But at least they will have a choice. ~ 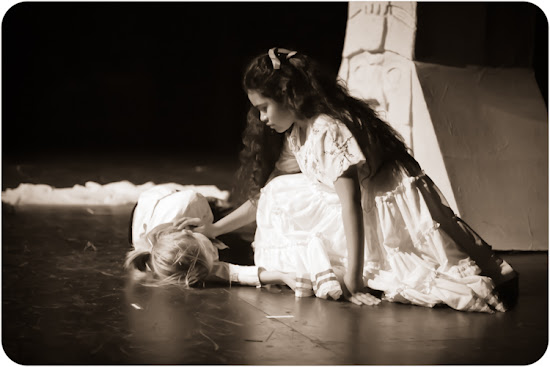 I feel incredibly fortunate for Elizabeth to have had this life experience offered in a loving and nurturing setting for the last 6 years. She has experienced true learning and education at an institution that understands the nature of educating children. She has never had a single test (other than state required end-of-grade testing) nor has she ever received a letter grade. She and her friends all learn together as a team, help one another, and support each other in a non-competitive learning environment. As you can see in all of the previous photos and the following photo of Elizabeth with her friend Max (aka Romeo) after the play, this school has succeeded in the most extraordinary way. 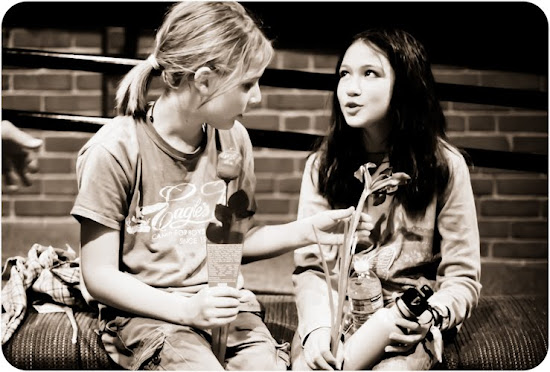