Paul and the Board 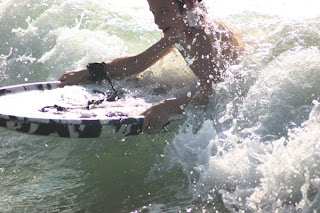 The first few days we were at the beach, Paul spent making friends with every kid on the beach that had a borrowable boogie board. After a couple of days, we noticed a trend and thought maybe renting a boogie board for him would be a good idea. Every moment he had a board, he spent either riding a wave in or running out to catch the next one. (I suppose the fact that he ate more last week than I've ever seen him eat should not have been surprising.) Also unsurprising was his list of favorite things we did at the beach: number one, riding the boogie board. Following the boogie board in the list of his favorites was playing shark at the pool, which also didn't surprise me considering the convincing shark I make when hunting down small children in the shallow end of the pool.