updates and pictures of the kids at camp, we finally ventured over to Asheville on Saturday to the stay the night so we could pick up the kids bright and early Sunday morning from camp. Elizabeth's counsellor was the first to greet us, with the information that Elizabeth apparently developed a cold and cough on their cabin campout Thursday night. When we saw Elizabeth, she looked no worse for the wear; al 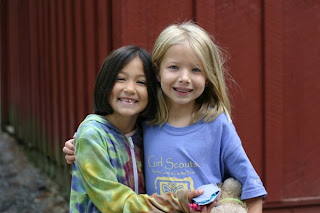 though she didn't seem to feel that great, she immediately launched into narration of her favorite camp experiences including the creation of a small pink unicorn, a friendship bracelet given to a friend, and the rice krispy mountain already eaten. She also introduced us to her favorite new friend, one of her cabinmates, named Taylor. 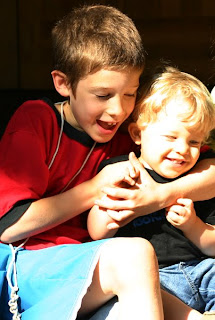 After saying hello and giving hugs to Elizabeth, we made our way to Paulie's cabin where he was, in all his coolness, hanging out with newly-made friends. He was, of course, most excited to see Finn and immediately, they were hanging all over each other while we clamored for information about his week. After he and Finn had sufficiently hugged and goofed off, Paulie showed us the bow he made for archery, the t

oolbox he made in woodshop and the pole he made for fishing. Despite the fact he appeared to wear the same swimtrunks and t-shirt all week, the mountain air and camping atmosphere definitely seemed to agree with him.


In short order all the bags, trunks, and pillows were piled into the back of the car, the money they didn't realize they had was spent at canteen getting new tribe t-shirts, and Finn's knee was torn up on the gravel trying to chase his siblings. Time to go. Until next year. 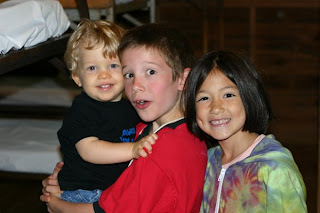 Climb the mountains and get their good tidings. Nature's peace will flow into you as sunshine flows into trees. The winds will blow their own freshness into you... while cares will drop off like autumn leaves.
~ John Muir
Posted by Joy at 1:24 PM