Our time in Bermuda was filled with so many adventures, not the least of which was the rocky boat ride home.  The glass-bottom boat ride over coral reefs and a shipwreck was the first we embarked on. We headed out immediately on our first morning in Bermuda and first took a tour of the islands by boat, then leaned over a wall to watch the underwater wonders through the glass floor of our boat. 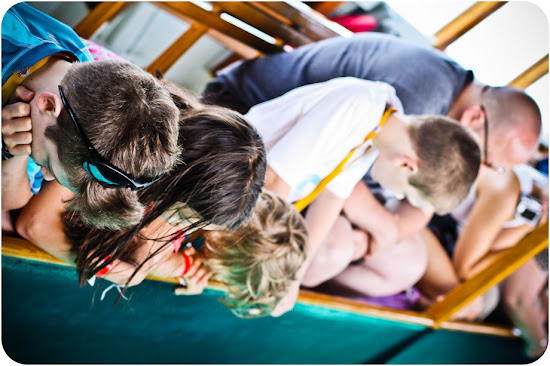 Our guide pointed out many types of coral, too numerous to remember.  This one was aptly named brain coral, making him easy to remember. 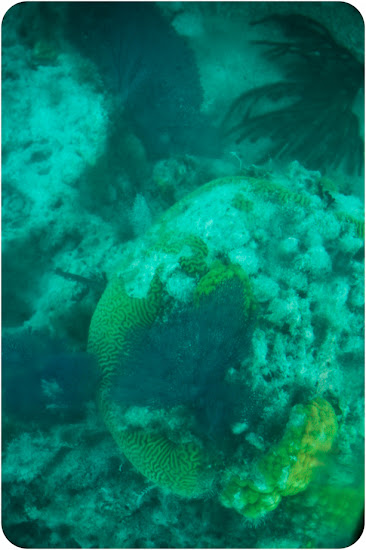 We saw hundreds of fish, of many variety, swimming among the coral. 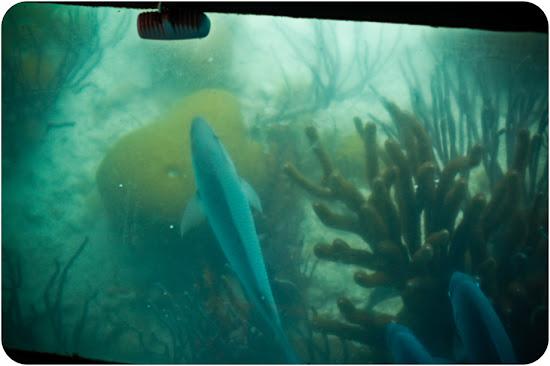 Then we approached the shipwreck.  We did a bit of reading about the HMS Vixen before we left home for Bermuda.  In fact, Finn was so taken with her story and pictures that he spotted her rusted hull poking out of the water while we were still a half-mile away. 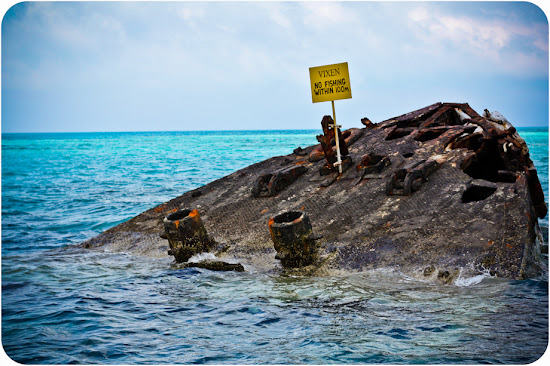 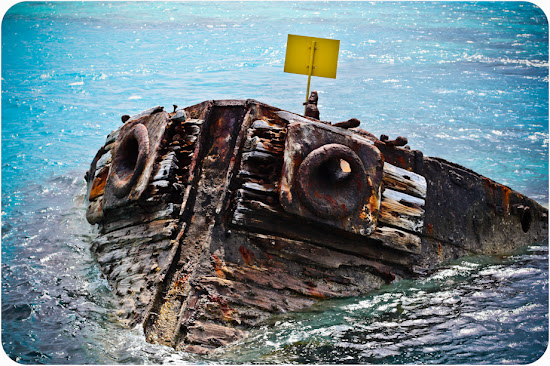 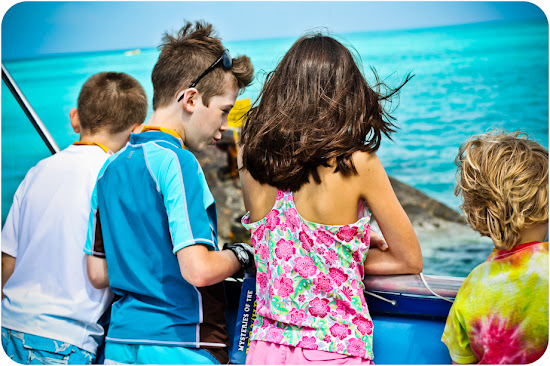 This was easily the highlight of Finn's trip and he still talks about seeing the Vixen both above and underwater, where she was covered with coral. 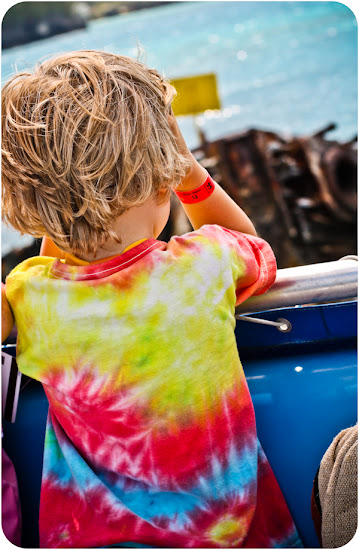 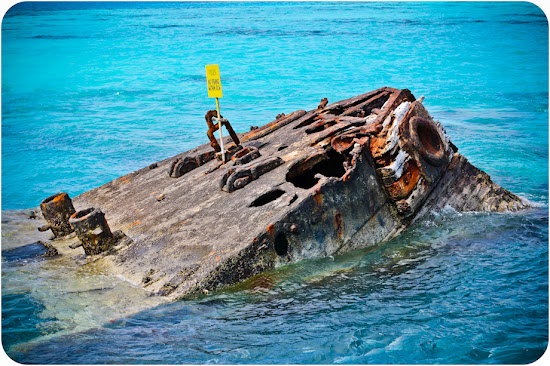 Our next adventure, a favorite of the older 2 kids and myself, was snorkeling among a few of the uninhabited islands.  We traveled by boat (that didn't even dock, but just stopped in a lagoon) for a chilly wade out to a deserted beach.  We then geared up and dove right into the chilly water for some snorkeling. 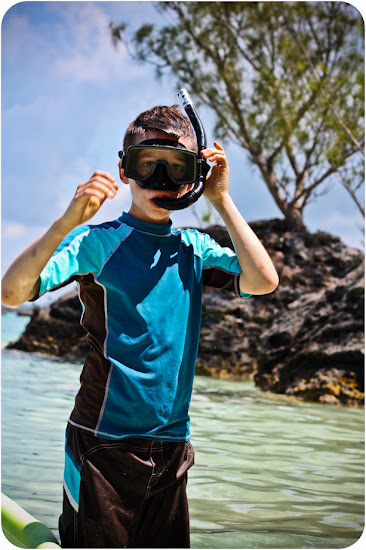 Paulie and Elizabeth took to snorkeling like pros.  I joined them for a while and it was a beautiful sight in those shallow waters near some of the rocks and sea floor to see coral and the beautiful tropical fish swimming nearby. 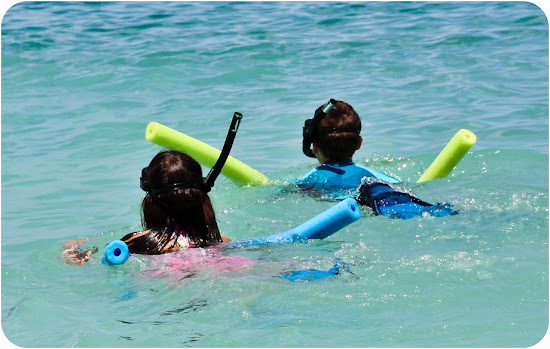 Paul tried snorkeling with both Philip and Finn, who could never quite get the hang of it and ended up frustrated with sea water either in their masks or snorkeling tubes. 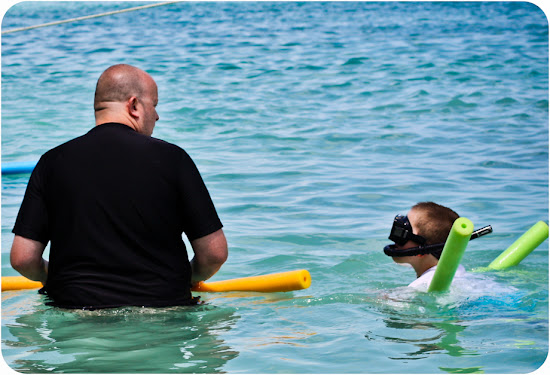 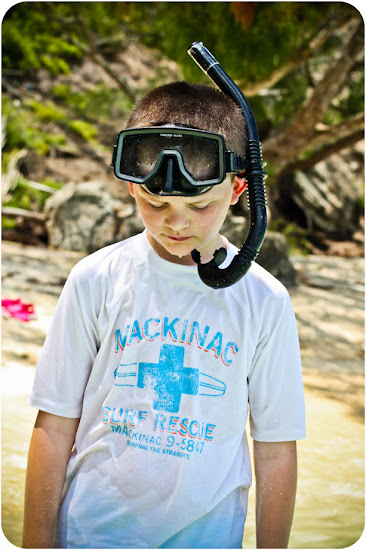 Finn was just as happy to play in the sand on the beach though. 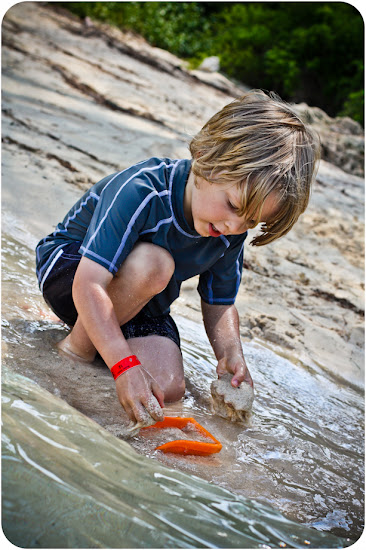 The water, as with many of the islands in this area, was so clear and blue.  The sand was coarse, like tiny rocks, instead of the sand we're familiar with on the East Coast.  We didn't make it to any of Bermuda's pink sand beaches, which means we'll have to make a return trip one day! 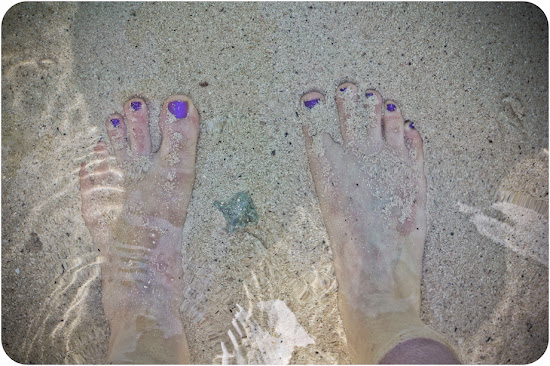 I was also amazed by the life growing up from the cracks and crevices of these rocks that make up the various tiny islands of Bermuda.  To be classified an island in Bermuda, the rocks or land has to support a 4 ft tree.  That's it.  And it's easy to see how that forms on so many of these islands, first with these tiny little shoots. 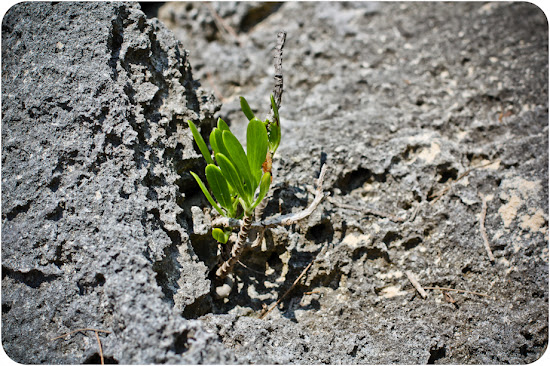 These rocks below weren't actually classified as islands, what with only 2 ft trees, but they were fun to snorkel around, rich with coral and cute little fishes. 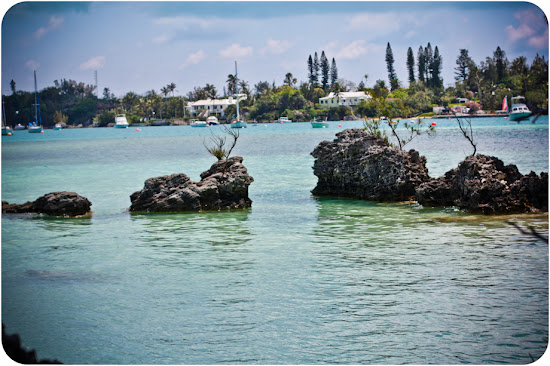 When we exhausted our snorkeling nooks and crannies, we spent some time exploring the sound by kayak.  Finn had his first kayak experience and proved to be quite a paddler! 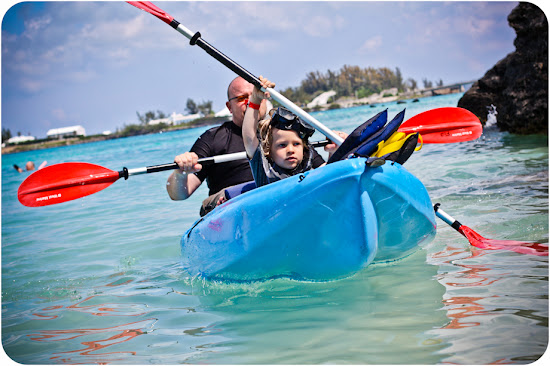 Philip enjoyed this much more than snorkeling and headed out in a kayak with anyone who would accompany him. 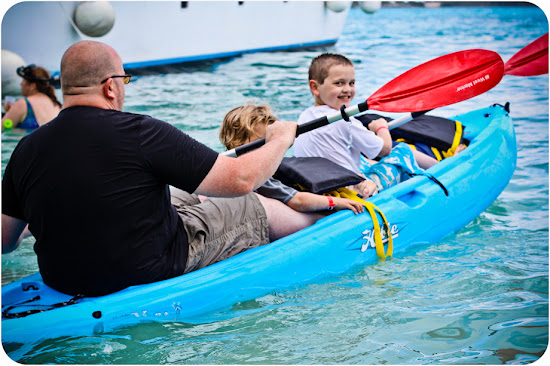 Paulie and Elizabeth, pro paddlers from their canoeing classes at camp, took the sound by storm and worried me only a bit, as this sound does open out to the sea.  They never ventured too far out of sight and returned frequently to reassure my motherly worry. 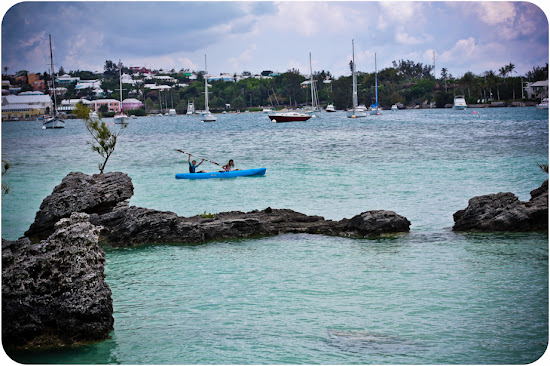 They skimmed between the rocks and around the islands with relative ease.  I was so proud of their adventurous spirit and adept handling of their kayak. 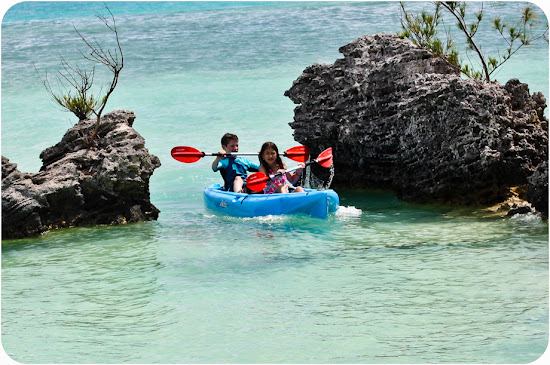 The last adventure during our time in Bermuda took place inside the Bermuda Maritime Museum, inside the old Royal Naval Dockyard. 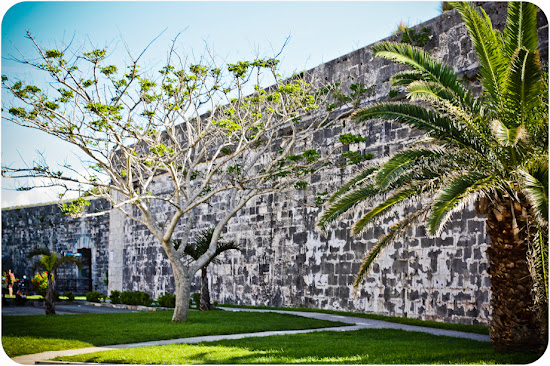 These old imposing doors were fun to photograph, and especially fun for the kids was entering through the tiny door inside the larger door on the left. 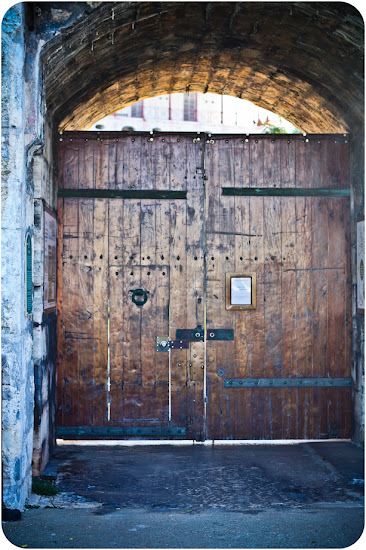 And inside the museum, we spent about 45 minutes swimming with a couple of dolphins.  This experience was a surprise for the 3 older kids, and they could not have been more thrilled. 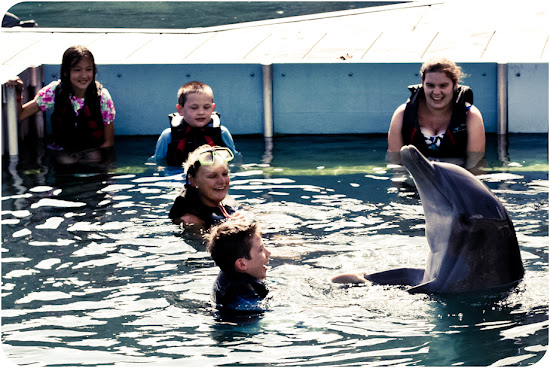 We spent some time swimming with them out in the water and watching them underwater with goggles. Then we each got to use a hand signal and have them do a trick with us. 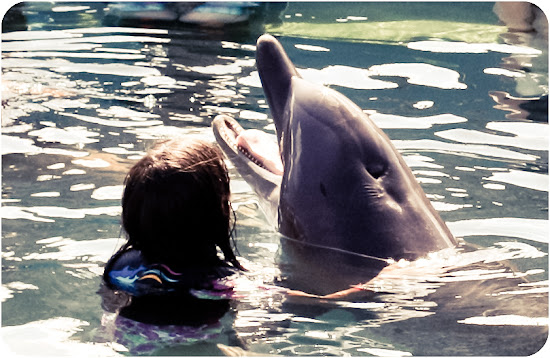 We spent some time petting them and playing with them. 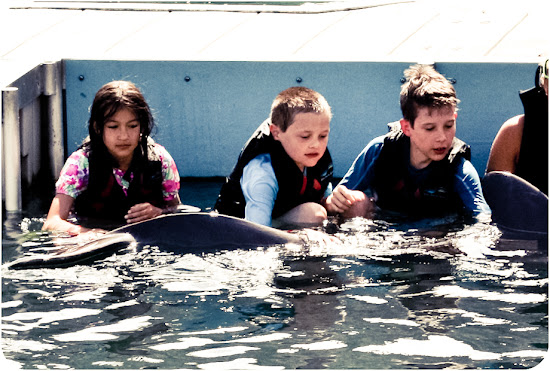 And they performed a few tricks for us. 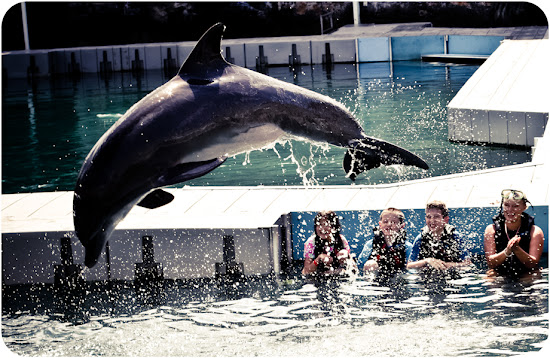 I think the kids really appreciated their time in Bermuda and enjoyed some great life experiences.  I hope they reflect back on their trip with fondness and great memories.