Broken Cameras and Back to School

So, tell me how you're supposed to send all your kids off to school, including one to kindergarten, with no working camera to document the occasion? Our camera is taking pictures like this:
After much research online, we discovered it will be about the same price to buy a new camera body of a slightly newer style as it would cost to repair our old digital SLR so a new Canon Rebel is now in the mail to us. 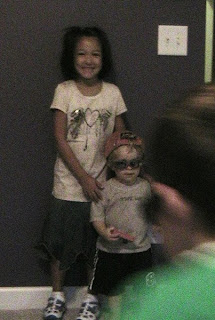 In the meantime, I'm having to use motion pictures and our video camera's very grainy stills to capture life events. Elizabeth started school the day after our return from the beach. She bubbled with excitement over beginning second grade and seeing her old first grade friends. Typically, Finn stole the show by trying on his big brother's hat and sunglasses and popping into every picture.
On the boys' first day of school, Philip was less than enthused at the prospect of becoming a burgeoning kindergartener. He seems to be settling in quite nicely though. Paul bounded in to third grade without missing a beat and will become class clown again quickly, I have no doubt. And so another school year begins.